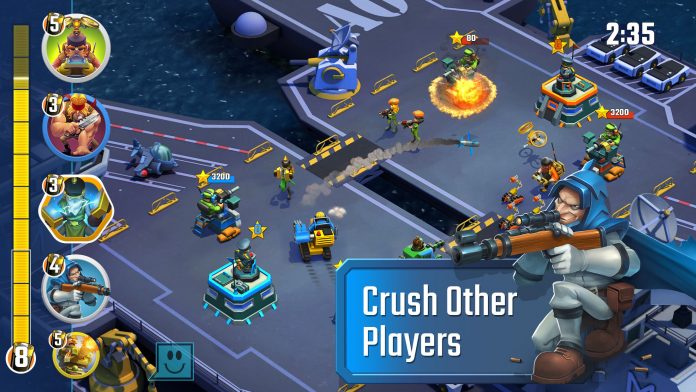 The high intensity shooter Blitz Brigade is back! This time things are getting a little tactical! Blitz Brigade: Rival Tactics is the newest game in Gameloft’s Blitz Brigade series. Unlike the original first-person shooter game, this sequel is a real-time strategy game.

You’ll deploy a variety of units each with their own unique strengths and weaknesses as you attempt to take down players from all around the world. There are lots of units to choose from so the strategies are endless. How will you conquer your opponents? We’ve got some help for you right here in our Blitz Brigade: Rival Tactics cheats, tips and tricks strategy guide!

Since this game features only a player versus player mode, strategy and unit selection is very important here. So let’s get started with our Blitz Brigade: Rival Tactics tips and tricks guide!

You might have a specific strategy in mind but always remember that if you specialized too much you might end up with no counters. Try to build your battle squad around a central strategy but still leave enough wiggle room for any tactics you’ll need to come up with on the fly.

For starters, make sure that you have units that can target all different types of units. If run a battle squad who can only attack ground units, you’re done for if your opponent has a lot of air units!

There is no way to tell what type of units your opponent has in their battle squad until the fight has already begun. It’s for this reason that we believe it’s a good idea to play aggressively early on in the match. For example, if you’ve got slow heavy hitters like the Siegemaster XL, deploying it early will force your opponent to react accordingly.

Whether this means they drop a Crawler Swarm on it – which are, by the way, probably the best counter to Siegemasters – or put down a bunch of regular Rifle Grunts, you’ll know what they have at their disposal. Figuring out of what units they’re packing is key to developing new strategies on the fly.

3. Figure out the biggest threats and neutralize them!

Blitz Brigade: Rival Tactics is all about countering your opponent or forcing them to play certain units. To do this, you’ll need to centralize your attack plan: figure out what their strongest unit is and find a way to counter it. Most of the time players will devise strategies that are formed around their single strongest unit, and you can take advantage of this.

Like the aforementioned Siegemaster XL, this unit is slow and colossal. It has a lot of health and doesn’t go down easily but it only targets buildings. It’ll completely ignore enemy units, even those that are attacking it. You can counter this by deploying a lot of cheap, fast units in the lane it’s going down. Again, like we mentioned, the Crawler Swarm is the perfect counter for them.

4. Use your highest level units!

Gaining duplicate unit cards will allow you to permanently upgrade that unit’s stats. If you’re having trouble building a battle squad, look at your strongest units and try to form a group around that. Using your highest level units is always a good move unless you’re gunning for a specific strategy.

Chests are awarded after winning a certain amount of a matches. Be careful! The rarer chests obviously have better stuff in them, but they take a long time to open. The green rarity chests can take up to eight hours to open! You can only queue up one chest to be opened, so if you’re actively playing the game you may want to wait until you get a common chest.

The common chests only need an hour or two to be opened. You also get a daily challenge chest after winning a certain amount of matches. Chests are the main method of getting new unit cards!

That’s all for Blitz Brigade: Rival Tactics. If you have any other tips or tricks to share, let us know in the comments below!