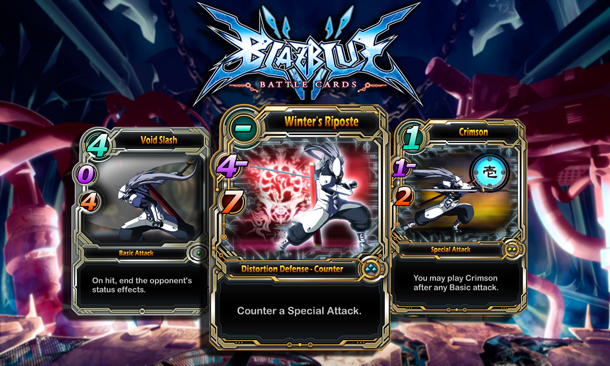 The acclaimed fighting game series BlazBlue comes to iPad in the form of a collectible card game. BlazBlue: Battle Cards takes the characters and moves from the series and contains them in a portable card game. Build your decks based on your favorite characters and win against other players with the help of our BlazBlue: Battle Cards cheats, tips and tricks strategy guide!

1. Save your Break for the right moments!

Breaks are interruptions that turn the flow of battles. They can be used actively or reactively, but keep in mind that they may only be used once a match! Good timing and prediction is key to utilizing breaks to their fullest potential. They might even win you the game!

Your repertoire (blue cards) has cards that have no heat cost or heat replenishes. Your grimoire (red cards) has cards that spend heat. When it’s time to draw, it’s usually best to have an even balance between to two, especially if the match is still in the early stages. You want to build heat with your blue cards so that you can use your powerful red cards, which expend heat and usually include your character’s Distortion Drive card, the super move. Speaking of which…

Distortion drive cards are your character’s ultimate attack. They usually cost around 4 heat to play, and cannot be countered by defensive cards. Use these cards when you have a big opening with no hope of your opponent counter-attacking, such as after they’ve used their break.

4. Have card ranges for each number!

If you want to be more defensive, it’s best to keep cards with a variety of ranges of them in your hand. If you’ve got cards with ranges from 1, 2, 3, and so forth, you will be able to block just about anything your opponent throws out at you, at least until the grimoire cards start to come into play. Just remember that if you block with an attack card, you will still take 1 chip damage afterwards. If you play too defensively, your opponent will just whittle you down.

Bounties function like quests. You’ll get an assignment completing it will grant you some neat stuff, sometimes even new characters! Most of the time though you’ll get souls, which you can spend to buy core packs. This is the primary way of earning souls, aside from obviously winning matches against other players.

For each deck you create, you have to assign a character to it. Each character has a unique playstyle, so you’re going to want to build the deck around your chosen character’s strengths. For example, Taokaka has a unique ability on her heat cards called Cat Scratches. This makes opponents take extra damage when they guard attacks, so you would want to build a deck with her full of basic attack cards that have different ranges. Experiment with characters to see which ones you like the most!

BlazBlue: Battle Cards is still a new game, so more strategies will come up later. If you’ve got any such strategies or tips to share, leave a comment below!