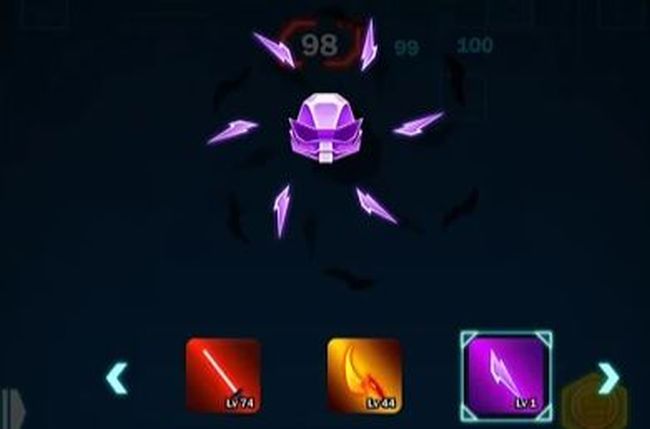 In today’s article we are going to dive into the Blade Hero tips and cheats to help you pass more stages and get better at controlling your character!

I’ve got to admit that this game is super fun and it’s terribly addictive! You might want to play for just a little while, but you will end up finding yourself glued to your phone playing for 3-4 ours! And if that is the case, then you’ve definitely caught the Blade Hero “fever” too, since it’s just so good!

But if you want to get better and improve your character in numerous ways, then let me help you do that by checking out all of the Blade Hero tips and tricks right here below!

Always be in control of your character

What I mean by this is that you should never take your finger off your character and leave it to wander on its own, because it will almost never result in something good – especially at the beginning of a level, and even more so if there is a boss fight.

I suggest that you always try to move slowly from left to right and avoid sticking to the sides, as you never know when there might be an enemy monster quickly charging at you and luckily getting past your rotating blades (happened to me, so I am not taking any chances ever again).

Don’t let your hero wander off on its own, because chances are it will not really attack any enemies properly and you will find yourself dead for seemingly unknown reasons.

Upgrade your weapon whenever you have enough Gold

The more enemies you will kill in every level will give you more and more Gold, depending on how well you do. There will be boss stages which will drop a lot of gold, and if fought properly (WITHOUT dying) you will get thousands of Gold!

I suggest that whenever you have collected enough Gold, you go on ahead and start upgrading your weapon, because it will deal more and more damage, and spin faster (which also means more damage). By doing this you will be able to keep up with the increasingly stronger enemies, so consider investing all the Gold you make into upgrades.

Similar to the first weapon, the very first Secondary Weapon will be unlocked once you passed stage 10. This weapon will appear closer to your character and will also have a similar function as the first one, but you’ll be able to unlock new ones by passing new stages:

I suggest that you take as much Gold as you can and invest it into both of them somewhat equally, because they are both important to having a strong character – so don’t skip upgrading the secondary weapon!

Unlock new Skins for your hero

As you keep progressing through the stages and level up you will be able to also unlock new skins for your hero, completely for free! You can do that by heading on to the Skins button in the right side of the screen and there you will see how many levels you need to have in order to unlock each one:

– For first skin you need to be level 3.

– For the second skin you need to continuously log in to the day for 3 days straight.

These skins are purely aesthetic, so it’s entirely up to you which one you want to use, but the last one is by far the best (at least in my opinion)!

Try to pick up the free temporary boosts

After you defeat each enemy, they will always drop Gold and sometimes there is a chance for them to drop Blades and other temporary boosts, as well as stars with 10x EXP! You will not pick these items automatically, and therefore you will need to move in their direction and touch them with your blades (to pick up the blades) or with your character (for the boosts).

In my opinion you should be always with your eyes wide open as to what items drop, and where, because sometimes as the stage moves along, you might defeat some enemies further behind and the drops they will drop, can easily be missed! So try to avoid that by killing them closer to the middle of the arena.

You should be especially wary of the temporary boosts because they will help you clear the enemies A LOT faster than you normally would with your usual “day to day” weapons!

How to get free Gold?

There are a few ways in which you can obtain more free Gold in the game, so let me explain to you all of the ways to do so, as Gold is one of the most important currencies in the game which will make a HUGE difference when used to upgrade your weapons:

– Watch an ad when completing a stage for 3x Gold:

You can choose to watch an advertisement when finishing a stage by pressing the button which will appear under the Gold saying “3x” – that will start playing an ad for you, and once the ad is finished you will receive that sum tripled!

I really advise you to take advantage of this option especially after playing a boss stage, as the Gold reward from these is significantly higher!

As I will mention below in more detail, this is something you can do and it can reward you with either Energy or more Gold, and so it’s super useful!

– Tap on the “Coins” option to watch an ad and earn more Gold:

This option will let you farm Gold by watching advertisements non stop pretty much. If you are not bored to do that, feel free to keep pressing this button and “farm” Gold by spending 30 seconds each time to watch an ad.

– Offline Revenue is a thing:

While you are not spending time in game online, you will receive Offline Revenue which will keep adding up. That is basically a sum of Gold which you can tap to claim “3x” by (again – no surprise) watching an ad to triple the sum!

I suggest that you do this despite all of the other ways to earn Gold (a.k.a. more ads watched) because the offline revenue will give slightly more Gold!

This option will appear in the left side of the screen and in order to spin that space wheel, you will have to watch an advertisement! I really suggest that you do this especially if you are running low on Energy (which is required to play a stage) because there is a high chance you will get +10 Energy or a lot of Gold!

Now a little something that you might have or might not have thought about is how fast you are moving your character around. The key is to always move slowly, because otherwise you might end up getting ambushed by enemies and that is going to result in death!

You should never rush when moving the hero from one side to the other, because the faster you move it, the more likely it will be that an enemy will slip through the blades and kill you!

Avoid sticking to the sides, play around the middle

If you played the game for a little while, then you probably noticed all of the heroes will come from the sides, and will never “spawn” in the middle of the screen. Since you never know where they might actually be coming from, you should always try to avoid sticking to the sides because some enemies will be super sneaky and kill you before you kill them.

You should try slowly moving your character around the middle of the arena because that is the safest way. Also, try to always keep the enemies at blades’ length because that is how you can destroy them the fastest without getting hit!

These would be all of our Blade Hero tips and tricks that we have for you right now! Do you know some more useful tips and strategies that you want to share with the rest of us? Feel free to leave them down in the comments section below!