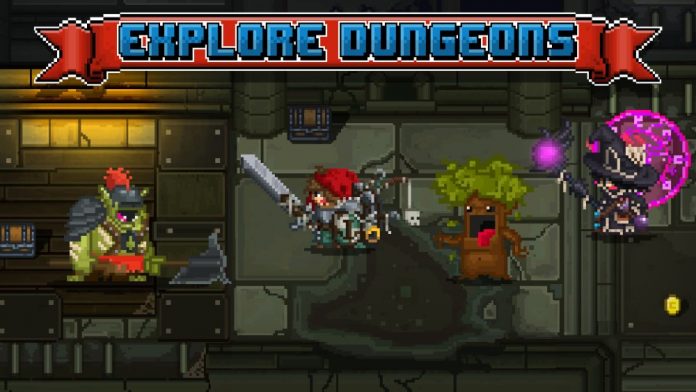 The charming Bit Heroes game created by Juppiomenz and published by Kongregate has finally made it to mobile! An extremely interesting MMORPG with procedurally generated dungeons and tons of things to do, the game might seem a bit overwhelming at first, especially for new players. We’re here to help! Read on our Bit Heroes tips and cheats: a complete strategy guide aimed mostly at beginner players. However, more advanced players might have something to learn as well, so don’t hesitate to check our this guide!

There are tens of familiars to collect and even more dungeons to beat, so let’s not waste a single second. Read on for our Bit Heroes tips and tricks!

Complete Bounties
One of the things you should always focus on completing are the Bounties. You get 2 new Bounties (Quests, basically) each day and you can have a total of 10 active ones. Completing them usually rewards you with very good items or a lot of coins, so make sure that you always keep an eye on the bounties and strive to complete them as fast as possible for quick progress

Dungeons guide & tips
You’ll spend most of your time trying to beat the various dungeons in the game, so an overview and guide to them would come in handy. So here is a set of things to have in mind when it comes to completing dungeons:

– It seems that they are procedurally generated, meaning that they will be different each time you play. This is great, because you will always get different rewards and you’ll face different enemies.

– On most occasions, leaving the Auto Play option on seems like a good idea as the AI does a pretty good job to complete the Dungeons, especially if you’re overpowered. This is perfect especially for when you’re grinding on levels you have already completed (boss levels) in order to get more XP and improve your player stats. Just go for the highest difficulty you can beat easily and let the AI battle it out while you do something else. You will only need to tap the screen if you meed the merchant or if there’s a chance to persuade a Familiar to join you.

– Have in mind that when completing Boss levels, you can bring in fellow guild members instead of familiars. This is extremely useful, especially if you are in a solid guild with high level players.

– Always try to collect everything and clear a Dungeon before exiting – even if you defeat a boss, there might still be some extra treasure that you can collect. Make sure you do so.

– It’s better to replay Boss levels instead of trying quest missions you can’t complete. Even though you get to keep everything you collect during a mission even if you lose, the rewards are usually better when completing Boss Levels. Do so until you are of a high enough level to easily beat the regular campaign missions.

Weapon skills are extremely important
There are various weapons available in the game, each with its own rarity and skills that it gives you in battle. Therefore, it is extremely important to check out the skills each weapons offers and how useful they would be to you in the said battle. Make sure you equip new weapons, check out their skills and only afterwards decide if you should keep it or not. Some weapons are better for offering support, while others to better in causing damage. You must find the best one to use for your situation.

How to win battles
Although having a strong team is essential when it comes to winning each battle, there are some things that you should keep in mind in order to make things easier:

– You can use potions whenever it is your turn. Although early on there’s no real reason to use the potions (it’s better to hoard on them until things get really difficult). don’t forget that you have them as an option and use them to win difficult battles.

– Switch characters around in order to keep the alive for longer. It rarely happens for enemies to cause damage to multiple characters, so a good strategy is this: start the battle with your current setup and after a few turns, switch your foremost character with one behind them. This usually means that you get a new full health character up front, while the character that was at the front at the beginning is now safe at the back. In other words, this increases your chances to win each battle

– Be smart when it comes to using the special attacks of characters. Make sure that you do so when they give you the biggest advantage in battle. For example, if you use the Bat’s “suck life” ability (or whatever it’s called) and the opponent has fewer hit points than the damage your bat will cause, your character will regain less health.

Guilds are a must!
Joining a strong guild is extremely important if you want to progress faster through the game. A guild with members that have a strength similar to yours (or even better) is extremely helpful when it comes to grinding on the completed Boss Battels: just start exploring the dungeon with your best teammates, set it on Auto and you have nothing to worry about.

Also, you gain honor in a guild based on the XP points you earn for the guild and you can spend Honor in the Guild’s shop for purchasing useful items. So joining a solid, active guild is a must!

How to upgrade your Stats
As you level up, you will gain points to spend on your Stats. Although strategies vary depending on the type of player you want to be, my suggestion is to focus on Agility as it allows you to attack multiple times in battle, then Power and leave Stamina at the end. Your hero doesn’t have to always be up there at the front, so having huge health isn’t a must early on – you get more from attacking more often instead!

Skeleton Keys
Skeleton keys are hard to come by, but they are extremely useful in the game if you stumble upon a premium chest in the Dungeons. Have in mind that the goodies inside a locked chest get better as you progress through the dungeons, so it’s a good idea to try and keep your Skeleton Keys until later in the game.

Equipment Guide
There are a ton of equipment bits that you can find and equip in Bit Heroes. Usually, it’s pretty easy to keep track of what you have equipped and what other options you have (there is a green arrow marking better equipment, while a red one marks equipment with worse stats). But it’s still a good idea to check out the stats of each item, especially if they’re of a similar rarity: the bonuses they give will be different compared to other items, and you might prefer them better, even though the total number of extra points you get is the same.

Familiars
You can take up to two familiars with you when completing quests or three in PvP battles. This is why it’s important to try and have as many as possible – you usually get them by Persuading familiars during battles, but you can also use the Fusion options to craft your own (although it’s a really difficult process, requiring a lot of resources).

You can’t level up familiars, although they seem to gain extra stats based on your level and I haven’t found any real use to having more than one (except for the fact that you can get into battle with multiple familiars of the same type). So when it comes to Persuading, be extremely selective and go for those you feel will really help you in the long run, because there are big chance your Persuasion will fail and you will lose the money.

Over to you now. There’s a lot to do in Bit Heroes and we might have missed something. If you have additional advice for fellow players, don’t hesitate to let us know by commenting below.