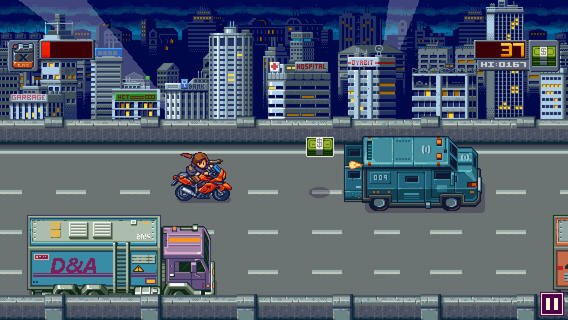 Bike Assault is a pretty basic side scrolling game that challenges you to collect as many stacks of money as possible before you run out of gas or you hit a vehicle. Although the concept is pretty basic and the game’s success is completely dependable on the player’s skill level, we’re still going to try and help you with a set of Bike Assault tips and cheats that will hopefully help you get the first 100 points, then your first 200 and so on. So read on and have fun collecting as much money as possible!

It’s all about shooting the van
The van that holds the money is the only thing you should care about (except from the obvious – getting gas and avoiding all vehicles). Try to shoot at it constantly in order to have it drop money. Make sure you also collect the dropped stacks of money, but don’t risk anything at this stage as the van will never run out of money.

Look at the lines on the road
An easier way to navigate through the traffic in Bike Assault is to look at the road lines instead of the vehicles themselves. This way you will always know which path to take and it will be a lot easier.

Up and down only
Try to keep your driving as simple as possible. Although you can move in 4 directions, there is rarely any need to actually move forward and backwards. The simpler the movements you have to make, the easier it is for you to control the bike and the lower the chances to hit another vehicle.

Keep an eye on the gas meter
Although it’s highly advisable to try and get all the gas cans that you encounter along the way, if your gas meter is pretty full, you can skip one. The basic rule of thumb in the game is, in the end, “don’t risk it!” If collecting the gas canister or a stack of dollars seems too risky, don’t do it. There’s just one game over and you don’t want everything to end too soon!

And this would be it for now in terms of tips and tricks for Bike Assault. Do you have other strategies that work when it comes to this game? Let us know by commenting below!