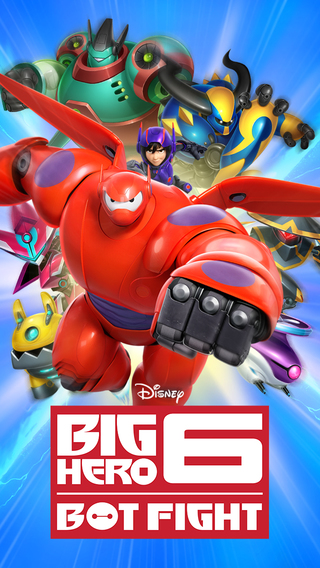 Are you ready to join the bot fight? Big Hero 6 Bot Fight is Disney’s take on the popular hybrid match-3 RPG puzzle game. Whew, that was a mouthful! Join forces with Hiro and Baymax on an epic puzzle adventure! We’ll help you construct the best fighting bot team and plow through the bad guys with our Big Hero 6 Bot Fight cheats, tips and tricks strategy guide!

It’s almost a given at this point but still deserves reiteration: there’s an elemental tree to take advantage of, and it’s your usual elements. Thermal (red), bio (green), and hydro (blue) are all the main elements, which are just fancy names for fire, grass, and water, respectively. Thermal beats bio, bio beats hydro, and hydro beats thermal. Solar (yellow) and magnetic (purple) beat each other, acting as this game’s version of light and dark. When you use the right element against an enemy, you do double damage, which can really add up on top of a big combo!

Matching power cells in a specific manner will leave behind a special power cell. Depending on how you create them, they will do all sorts of things:

3. Team up with friends!

Whenever you enter a level, you’re asked if you want to bring along a random user. If you do so, both of you will gain a currency called Ally Points, and it looks like a silver bell. Be sure to team up with as many people as you can, because you can use ally points to gain new bots! Also, if you do end up adding someone to your friends list, they will sometimes show up on the partner selection screen. If you play with them again, you’ll earn even more ally points, so keep teaming up!

Since there are 5 slots on your team, you can have a bot from each element type! If you don’t know what you’re going up against, it’s best to do this so that you have all your weaknesses covered and you can exploit any enemies you encounter!

If you need to power up your team, don’t be afraid to go through earlier levels and try to gather up more bots. Your bots naturally get experience as they participate in battles, but if you really want to speed up the process and also increase their stats, try fusing them with other bots. Depending on the strength of the bots you’re fusing, it might end up costing a bucket load of coins, but it’ll be worth it!

It’s a bit harder in this game since you can’t move the pieces freely around the board, but if you can, try to set up big combos. As always, combos help you do insane amounts of damage, especially when you get your entire team to attack in one go. Examine the board, and take your time; try to predict where power cells are going to end up.

With all that in mind, you should be able to put together the best bot team ever! If you have any other questions or suggestions, leave a comment below!