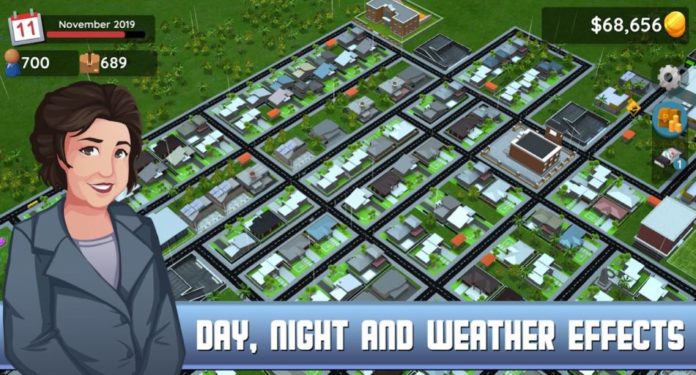 In today’s article we are going to share with you all of our Better Communities tips and cheats to build a bigger, better and more beautiful community and expand the small settle into a beautiful and prosperous city!

In this relaxing game you are in charge of creating an entire city from scratch, so you will have to gather people, expand, build various facilities and places where people can work, relax and all that considered – you need to also keep them safe! But that’s why we are here – to share with you everything that you need to know!

So therefore let’s not waste another second and dive right into our Better Communities tips and tricks to build a bigger city right here below!

In the game you are starting with pretty much population 0. You will have to build houses, cafes where people can relax, industrial buildings so that people can get job and so on. But firstly, you will need to build houses.

The houses will facilitate people moving in, and that means that your population will increase, which makes it easier for you to unlock new features.

So in my opinion you should start building several houses so that you can accommodate more people and thus increase your population number.

This should be the very first thing you focus on – building housing! But you need to be careful how you are building them (and where) because the facilities nearby are going to impact the living conditions and expenses – but let’s dive into that in more detail below.

Build everything in the right place

Everything that you build will have an impact on the population, so you need to mind where you are placing the industrial areas, the hospitals, police stations and so on. These facilities will impact their surroundings so you need to think carefully before building them.

I suggest that you should build small pockets with the same buildings – for example, if you want to create an industrial area, where you will have multiple industrial buildings, you should think about the fact that those buildings are going to make a lot of noise, and they should not be next to the houses where people live. So I suggest building them further away from the city center.

As for the houses on the beach, as beautiful and dreamy they sound, the living expenses there are super huge, so people will most likely not want to move there! So instead of building your dream city on the beach with houses, try it with duplex instead.

Or with everything else other than the simple houses – those negatives will eventually make people abandon them and that’s a shame.

Place the bigger and more important facilities inside the community

There are some structures, such as a hospital, a police station, firemen, and so on, and those will give a boost of happiness and safety to the houses nearby. In my opinion, those should be placed somewhere in the middle of the community so that more houses nearby can benefit from this added benefit.

The same applies for the schools and such – try to think about this in advance and when building the roads, take into consideration leaving some empty spaces to build those in the middle of the town. Or even better, start building more houses around them! It’s better to have houses rather than cafes or industrial areas next to these buildings.

Place the dumpster as far away as possible

There will be at least a dumpster required in the game, because that will reduce pollution and make the entire community better. However, I really advise you to build it as far away as possible from the city, because otherwise you will end up making the people around it unhappy… and really, who wants to live next to a dumpster? Both in reality and in game!

I suggest that you build a road which should take you to the dumpster and that it is kinda far from the rest of the city, even if that means leaving some empty weird areas between.

Don’t worry – you can later fill those areas with industrial areas, place parks or even just put lots of trees there to try and keep the air fresh.

Seriously, the roads are super useful! They will facilitate transport and will make access to everything much easier. Keep in mind that you can only access a building if there is a road adjacent to it! So the more, the better. You can try to place your structures like this:

For 2×2 structures (houses and so on) you can build a road – then leave 4 blocks empty so you can place 2 houses back to back – then build another road on the 5th row. This will help you create small pockets of buildings which are all accessible from the road!

For more weirdly shaped buildings (because I am sure you happened to misplace some stuff – I did too), you can place roads on either side or simply fill in the empty gaps along the roads with parks, trees, statues and even bus stations!

Bus stations are a must have

Even if at start you won’t really see the need of a bus station, I really advise you to keep an empty block where you can sneak them in. The bus stations will facilitate transport and will make moving around the city much, much easier!

This will keep your people happy, and as an added bonus, will reduce the pollution levels! Because much like in reality, public transport helps with the environment by reducing the amount of cars there are on the road!

You might have already noticed some people complaining about a lack of parks in the game early on, but until you unlock it there is not much you can do. Once you have unlocked the Park, you will be able to place it down and that will make people happy because they will have a place where to take their kids out and play.

I suggest that you build the Parks next to the houses, or something like one park per 10-15 houses. That should be a fairly nice amount of parks and people will not complain about them ever again.

Put out the fires yourself

You should always be on the lookout for fires and other hazards around the city. When you see that a building is burning, immediately try to put out the flames. Don’t worry if it hasn’t happened yet – at some point will, and you will not miss it because it’s really hard to ignore a building in flames!

As soon as you see that happening, tap on the building and that will put out the flames and give you some money back. It’s a good way to make sure that the hazard won’t spread around the city and destroy everything before the firemen work it out!

Unfortunately, some of the buildings that you will construct will be unable to function properly so they will get abandoned. That will result in them not ever being inhabited again (because people think they are haunted). So I suggest that if that happens, you head on to the bulldozer and tap and hold on a building to immediately destroy it.

In its place, you can build something such as a commercial building, which might work better, depending on the location, land value and stuff like that. So just try and see what works best.

Anything that you build instead of the building which got abandoned should be a different type though, because if it is the same, it will probably end up the same way – abandoned!

Listen to your citizens’ reports

On top of the screen you will often find various memes and funny stuff that your citizens are thinking, but some of them are actually very useful. Sometimes the citizens will tell you if they need more parks, if they need a school, a police station and so on.

They will also start complaining about the rent if their house is on the sea shore, so try to listen to their tips, because they will most likely help you make a better city. You don’t have to listen exactly to everything, but most of the things that they say (and is not a meme) is going to be useful advice.

Tap on the event icons!

Sometimes you will notice some small icons appearing on top of some buildings. This will happen randomly, but those are called events! They will be either fires (as mentioned above, which is not exactly a good one), you can also see like a construction sign, or a graduation hat and so on.

Whenever you see those appearing on top of a building, make sure you tap on them because they will give you some money in return! That’s super useful, so try to benefit from this whenever you have the chance!

Take a look at our gameplay video right here:

These would be all of our Better Communities tips and tricks that we have for you right now! Do you know some more useful game tips and strategies? Share them with us down in the comments section below!