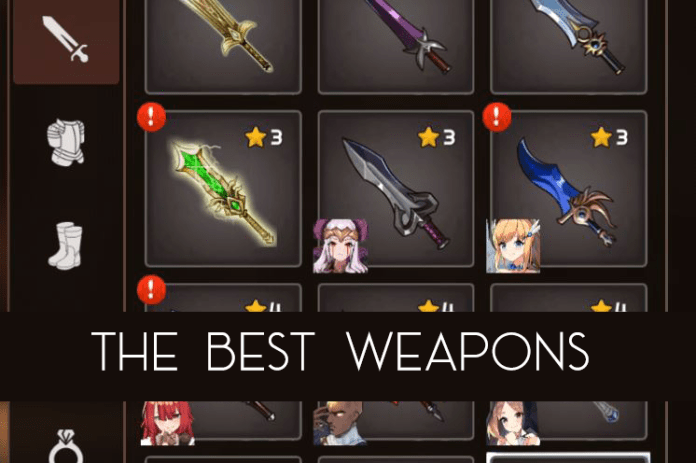 If you want to progress in Sword Master Story, knowing what weapons to choose for your heroes is quite important. Furthermore, weapons are a big part of the game not only actively equipped, but also for their passive stats. In today’s article we are going to take a look at some of the best weapons in game, so that you can try to aim for obtaining only the best for your heroes.

So, are you ready to check out the best weapons in Sword Master Story? Then let’s dive right in!

The Best 1* Weapons for Starting Out

When you’re just at the beginning, you are going to want to use pretty much anything you get. You won’t get any strong weapons yet, so you need to make a pick from the 1* or 2* weapons you get. Of course, you should change them as soon as you get a chance to do so. These are not good weapons, they are just decent for helping you get through the very early stages of the game.

This one is OK to use on your damage dealer at start because it’s the only 1* weapon that gives slightly more ATK than the others (+5 instead of +1 – I know, I know, still not a huge difference).

This weapon is great too if you want a boost in Critical Rate. A similar weapon to Gladius would be the Stiletto, but its passive is pretty null, so that’s why I prefer Gladius instead.

The Best 2* Weapons for Starting Out

Similar to the 1* weapons, the 2* ones are slightly better – but still bad (when compared to others). You should also use them solely for the early stages of the game, or until you obtain something better. Don’t invest too much into upgrading them and such, because it will not make a big difference in the end game.

This is a pretty good option, because it gives you quite a bit of CritDamage. If you already have a good carry, this weapon will be great on her because it will maximize the damage they do.

Penetration works great, especially against bosses. Whenever you are up against a boss, they might have for instance “Immune to Attack Damage” – if you have Penetration, a portion of the damage from your attacks will go through.

The Best 3* Weapons for Early/Mid-Game

Until you manage to get a pretty decent weapon on all of your chars, chances are you’ll end up using a 3* weapon on some of them. I definitely recommend holding up on upgrades unless you need them 100%. You won’t keep these weapons in the end game, but if you are very, very unlucky in getting better ones, you could upgrade them a little.

The Best 4* Weapons for Mid-Game

In theory, you want to wait until you get a good 5* weapon to upgrade it and invest some resources into it. However, I know firsthand how difficult it could be to get the weapon you want – so, it’s perfectly OK to invest in upgrading your 4* weapons if you can’t get anything else. These are solid weapons, and they will do a pretty good job during many stages of the game.

This weapon is pretty solid for your carries until you get 5* ones. It has a lot of flat ATK, which is a great help to characters that rely on ATK rather than Crit.

These are the best weapons in game at the moment, and if you want to get a great boost in damage, you should definitely consider using them as soon as you get them. I have prepared a good setup for you that works for pretty much any team comp you might have. So, if you’re not sure what weapons to go for, try to use the ones I list below.

You want Ascalon tailored for Cain (or for your second damage dealer) because it’s a great weapon that works wonders against bosses. As for the stats (Option/Additional Option) you want to look either for flat damage (ATK), damage to bosses, damage to normal monsters, or elemental damage type according to the hero (as shown in the image).

Yui is not just the only 5* healer in the game, but also the best one. She is definitely a hero you should try to obtain whenever you get some Rubies (get her during the Pick Up gacha event) and upgrade her quite a bit. She works amazing with Excalibur, because it gives a huge boost in ATK, which makes her heals and damage extremely powerful.

As for the stats, you want anything that adds flat ATK, % ATK or increased dmg to boss. These are all stats that scale good with Yui, so if you can, try to reset until you get something with tons of damage.

This weapon works great for your carries, because it boosts the ATK. You can use it on your second or third damage dealer, and try to reroll it until you get some good stats. I would recommend looking for damage against boss, damage against monsters, penetration, flat ATK or ATK %.

The Dragon Blade’s Unique Option is great for Cain as well as for any other DPS whose skill melts bosses and monsters alike (like Odin). You should try to use this weapon on another character on your team because it has some really good passive stats that’ll give heroes a great boost.

Also, try to reroll until you get damage to the boss, damage to normal monsters, flat ATK, or ATK % (or a combination of all of them).

Side Note: If you already have a weapon for clearing out normal stages, you could reroll this one to be the anti-boss-weapon.

The Ancient Katana is a fairly simple weapon (for a 5* weapon at least) but it has some pretty cool stats, which work great for damage dealers or support characters. Try to look for skills that you need on your team, ideally damage to the boss, damage to normal monsters, flat ATK, or ATK %. You can also try to tailor it to a specific character by rerolling for elemental stats for that hero.

These are all the best weapons in Sword Master Story. If you are not sure yet how to upgrade your equipment, check out this guide – and if you’re not sure about something, feel free to ask me any questions regarding the game!