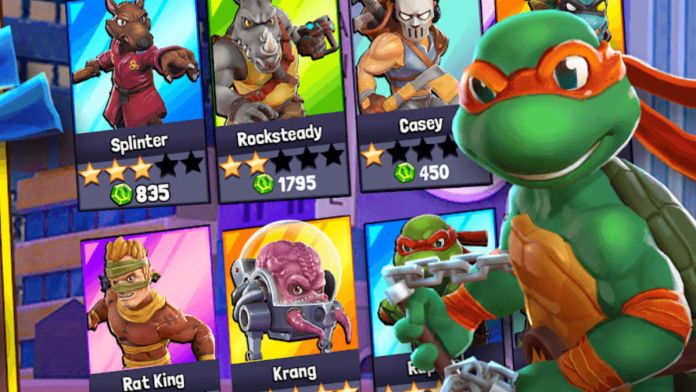 The Teenage Mutant Ninja Turtles are here to save the day, and they have brought friends – and villains – along for the ride! TMNT: Mutant Madness is a strategy RPG where players create teams of their favorite TMNT heroes and villains and watch them duke it out with enemies from the franchise.

Touch Tap Play has already covered the formation strategies and gameplay tactics in our TMNT: Mutant Madness guide on building a strong squad, and today we will be looking at the individual heroes and which ones are better than others.

There are lots of a heroes to choose from in Mutant Madness, so it can be hard to decide on what heroes to invest it. The game also is pretty slow to give you the resources needed to upgrade heroes, so you’ll have to choose carefully. Touch Tap Play is here today with a TMNT: Mutant Madness tier list guide to help you narrow down your choices!

S tier heroes are extremely powerful and we highly recommend them for just about any team build!

Our first hero on the list is good old Mikey. He wields his lightning quick nunchaku into battle, which allow him to stun his opponents. During the early game, his Cowabunga! active skill grants him defense and allows him to stun all nearby enemies.

Generally speaking area effect skills that hit multiple enemies are very strong in this game, since the arenas are so small enemies tend to clump up often. Due to this, Mikey’s area attacks are very powerful, not to mention their stunning capabilities.

At level 10 he learns Mikeynado, which gives his basic attack a periodic stun. This is already on top of his active skill stun, so Mikey is excellent for locking down multiple opponents.

His health is a little lacking, but he makes up for it with passive skills that increase his defense and haste while lowering enemies’ alertness and armor.

Mikey’s powerful area attacks that can stun are extremely useful, so don’t be afraid to invest your resources into him!

Leatherhead the crocodile is one tough hunter. He enters the fray as a front line tank hero, with high health to boot. He uses his trusty Beartrap as his active skill to stun and damage an enemy over time.

Leatherhead is a lot like Mikey in the sense that he has strong crowd control abilities, and combined with Mikey’s stuns you have a team that will completely lock down the entire enemy squad!

Leatherhead’s level 10 skill Tail Swipe will hit up to three enemies nearby dealing damage and slowing them. At level 50 Leatherhead learns Predator Instinct which allows him to gain more defense if he attacks an enemy that is slowed, rooted, or stunned.

Leatherhead’s innate tankiness and strong crowd control abilities make him a top pick for just about any team build.

The leader of the bunch, Leo is a support brawler who focuses on buffing his team and leading them to victory. However, once he gets enough levels behind him he can do some serious damage!

Leo’s Rallying Charge active skill deals big damage to a single target while buffing nearby allies. Rallying Charge at higher levels shreds through enemies, so Leo is the perfect guy for taking out individual enemies.

He can compliment this damage with Whirlwind Strike when Rallying Charge is down, as it deal decent damage to surrounding enemies.

All of Leo’s other passives deal with him buffing his allies’ strength, armor, and defense, so Leo is a great team player. His buffs are decent health pool are enough to keep him in the fray – protect him and watch him take out just about any enemy!

A tier heroes are great and excel at their class roles, making them a good fit for any team build, though they may not be as strong as their S tier counterparts.

Raphael is a great tank brawler if you haven’t settled on one yet. His Sai Rush active skill allows him to dash through enemies and deal slight damage to them and also giving Raph a quick way to reposition himself.

Battle Trance allows Raph to get in and stay, as the extra defense and strength give him the protection he needs to stay in the thick of things. At later levels his passives allow him to disarm opponents, which greatly reduces their damage output.

Sai Rush can be a little troublesome, however. Raph can totally put himself out of the way of your more fragile heroes, so enemies may find an opening to get to your back line.

With that said, Raph also has a naturally high health pool, so he is a great front line hero to have.

The machinist of the bunch, Donatello brings his favorite gadgets into battle to provide much needed support for his team. His active skill Omnigadget can deal slighty damage to multiple enemies while lowering their armor, opening them up for allies to take advantage of.

His single target Bo Smash also reduce enemies’ armor and strength for a whopping eight seconds while buffing Donnie with defense. Donnie’s early skills focus on lowering armor, so make sure you pair him with heroes that can deal lots of burst damage.

Donnie’s later skills allow him to provide barriers for his teammates, enabling them to take more punishment before going down. Barriers are extremely helpful for making your front line heroes even more tankier, so with some time Donatello can be one of your best supports.

Tokka the mighty turtle brings his hardshell into battle, providing lots of cover for his allies. Tokka has a high amount of health, and his active Slam Wave reduce all nearby enemies’ defense.

While Tokka is lacking the hard crowd control abilities (he really only has slows and roots) that the S tier heroes do, he makes up for it with passives that lower enemy defense and strength.

Couple this with Tokka’s high health and you have got one tanky guy. His final passive further buffs with defense and armor at the cost of disarming himself, so while he is mighty and nigh indestructible, he does little to no damage.

Though, if you do pair him with the other heroes that have lots of crowd control, Tokka can be a beast!

Baxter is a ranged hero that uses his energy gun to trap opponents from afar. Keep him safe in the back line and he will slowly pick apart the enemies while opening them up for big damage!

His active Energy Rope Gun is a fantastic root, targeting one enemy and rooting and disarming them for a whopping four seconds. It also deals decent damage, but the root and disarm pretty much make it equivalent to a stun.

Flyswarm gives Baxter the ability to reduce the strength of multiple enemies and deal damage over time to them. Fly Away also gives him a way to escape just in case things get dangerous.

His other passive Warthog Wham gives him some nice damage to his auto attacks, and it even hits nearby enemies as well!

At later levels, Bebop unlocks even more damage passives, which gives him pretty great DPS. His health pool is above average for a blaster/brawler hero, which lets him avoid the trap of fragile heroes with high DPS.

Bebop brings excellent area of effect damage to the table, making him a solid choice.

Other A tier heroes to consider: Dregg, Zak, April

B tier heroes are neutral choices as they’re more situational than the rest of the heroes on this list. They need careful planning to get the most out of them, otherwise they won’t be as effective. We don’t recommend these heroes, but they’re OK to choose if you have no one else.

Slash is a tough brawler who can battle it out while maintain his own health. His health pool is moderate, but he requires a lot of investment in order to get the most out of his skills.

His active Steel Typhoon is not great early on. It can hit a lot of enemies if it’s targeted well, but it does so little damage it’s not too impactful. Blade Frenzy helps out to augment the damage with its better damage.

Slash’s other passives focus on buffing his strength, and he gains an emergency barrier and armor once his health drops too low, giving him the chance to surprise enemies that may think he’s finished.

The fearsome villain of the entire series, Shredder is a brawler who rips his enemies into pieces with his steel gauntlet. His active Shred deals decent damage and disarms all nearby opponents.

Shredder’s entire passives focus on him dealing more damage as you can probably imagine, but the problem is that his health pool is incredible low. Being a melee brawler, he will always be within range of the enemy and there is not much you can do to protect him.

He’s decent early on, but his low health will really start to be a problem later in the game. He needs time to deal a bunch of damage, and he can easily get bursted down. Shredder can work if you build your team around him, but you really have to be careful with your formation and hero selection.

Splinter, the mentor to the TMNT, assumes a pure support role as his entire skill set revolves around him buffing the entire team. While this sounds pretty good on paper, Splinter has exactly one move that deals damage, and it’s not that much to begin with.

In a game where the fights are lightning fast and focus on hard-hitting skills that come out quick, Splinter’s usefulness is yet to be seen. Most of his skills grant extra defense to other allies.

The extra defense can help your team survive longer, but your DPS will take a big hit, leaving Splinter’s role less desired.

Napoleon wields his trusty whip into battle which lets him pull off some tricky moves no other hero can do. The trickery of his whip means his skill set is based around debuffs, but none of them are particularly useful.

Crack the Whip, his active, disarms enemies for three seconds which is decent, but the damage is pretty low. His other passives focus on inflicting armor and defense debuffs, but again with low damage.

The utility is nice, but again this is a game where you want to prioritize skills that hit hard and fast. The longer you draw out battles, the harder they become.

Other B tier heroes to consider: Casey Jones, Mondo Gecko

That’s our list on what we think are the best heroes in the game as of writing. We know you probably have some opinions on other heroes, so let us know in the comments below who are your best heroes!