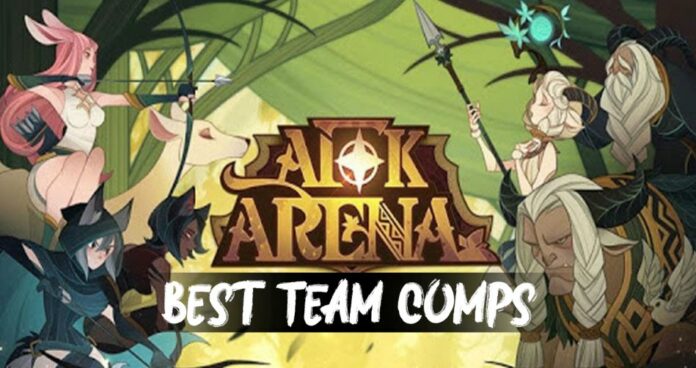 If you want to know what are some of the best team comps in AFK Arena, then you came to the right place. In today’s article we are going to dive into some of the best starter comps, some advanced team compositions, and give you some AFK Arena tips on how to pass the stages of the game.

There are three main stages of the game, more specifically divided by the level you can reach them in – you can see more details about that in our AFK Arena tier list. Today we’re going to take a deeper look into that and decide on a few powerful team compositions using these heroes.

So, without further ado, here’s our picks for the best team comps in AFK Arena!

This team composition is all about making Ezizh come online, and activate his passive, which denies enemies their ultimates. Through Elijah & Lailah, Mehira and Rowan you’ll be able to recover energy, while Talene will provide some healing.

In extended fights, you should be able to take enemies down one by one, slowly, and that will result in steady progress all throughout the game.

This team focuses solely on activating Safiya – her ultimate and her passive are key, and she synergizes very well with Eironn. This team will work extremely well in the end-game because all enemies will have reduced attack and haste, while the allies receive increased attack bonuses.

This team composition is all about Gwyneth – she is the one you will rely mainly for defeating the opponents, and in order to do that you want to buff her as much as possible.

With this team composition, your goal is to reflect the enemies’ damage until they kill themselves. That can be done by placing Thoran in such a way to activate his ultimate next to as many enemies as possible (you also want to upgrade Thoran as much as possible to increase the odds of this happening). It’s an extremely fun and satisfying comp to play if it works out, but it won’t always play out as intended. However, when it does, it is the best!

Daimon is super strong, and he can singe-handedly defeat all enemies as long as you give him the proper team and buffs. You should play this comp pretty slow, and allow Daimon to stack up and obliterate.

At the very beginning of the game, you want a team composition that doesn’t require too much investment and has the ability to carry you for a little while. This team comp is fairly easy-to-do but will start slowing down once you’ve capped Arden. However, it will do its job and help you at the start.

Shemira is still, quite a strong hero in the game at the moment, despite not being SS tier, and as soon as you obtain her, you can start upgrading her and adding her to your team. Additionally, once you cannot progress anymore with Arden, you can go ahead and replace him with Tasi.

This team is slightly different than the one presented at #2 (which I still consider superior), but it has a certain power to it. When you leave Safiya out you will be able to replace her with other damage dealers, and possibly create something that could have a fairly good synergy with the crowd controls you got.

Izold is quite strong overall, and if you upgrade his furniture you can really give him a major boost. He can stay alive for quite a long time, has plenty of damage, and is able to carry out fights despite his teammates dying one after another (in certain situations, of course).

I personally like to refer to Orthros in the same way I refer to arthritis – a back pain! All jokes aside, this team composition works great in PvP, given that the survivability it provides cannot be equaled. Your main damage dealer will be Flora, who will have the front line of Talene and Orthros, and not many opponents will be able to melt their way through them.

This is a similar composition to #6, but provides an additional 4+1 faction buff. It’s not an easy composition to play, because it requires some knowledge about the game (when and where to place Eironn for the best effect, etc). However, when it is played correctly, Eironn should pull the enemies while Brutus whirlwinds them, and then Eironn will ultimate.

These are all the best team compositions in AFK Arena that I would recommend! Do you have some additional team comps that work great for you? Feel free to share them with us and the other players down in the comments section below, and they might get featured in this article!