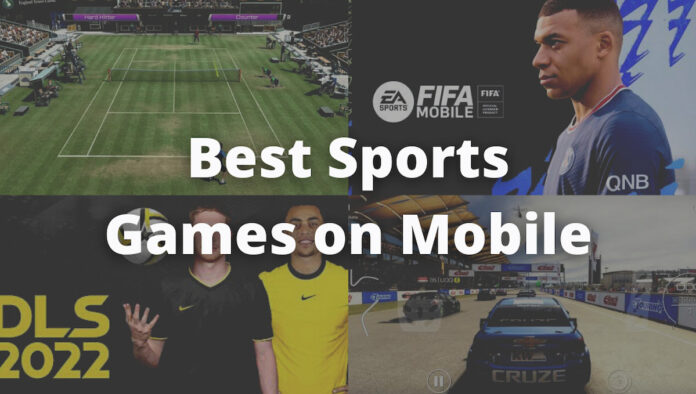 Despite gaming genres such as open world, FPS and role-playing have been doninating the mobile platform lately, there are some pretty amazing games in the sports genre that deserve your attention.

We can all agree that Konami’s PES 2017 blew EA’s FIFA Mobile out of the competition when it came out in late 2017 for Android and iOS. eFootball has so far garnered more than 500 million players on mobile devices.

With that said, here are the best sports games you can play on mobile devices.

NBA 2K20 gives you control of some of basketball’s most iconic stars in stunning visuals, realistic courts and challenging opponents. The game offers a variety of modes that are similar to its console and PC counterparts like Associations, MyCareer, NBA Stories, Multiplayer and an all new Run the Streets mode.

EA have also introduced a new 2K Beats Soundtrack as well which enhances the player’s overall gameplay. The graphics are top notch, controls are good enough and can be adjusted with lots of modes to choose from. However, NBA 2K20 does seem to be end of line for the NBA2K games for mobile as EA decided not to release NBA 2k21 and 2K 22 for mobile platforms.

This is the newest title from developers Psyonix. It’s an iconic socCar game has finally made its way to mobile devices after a rather extensive beta testing phase. The game sees you controlling vehicles, scoring with them and pulling off different skills in a round soccer pitch.

That’s where it got its name SocCar. Rocket League Sideswipe has garnered millions of players ever since it launched on mobile and is highly regarded as one of the best games on the handheld platform right now. It offers unique game modes, beautiful visuals and cool soundtracks.

Ever since it launched in 2017, Konami’s Pro Evolution Soccer, now eFootball, has completely revitalised the sport genre in mobile gaming platforms. The game has seen massive improvements over the years with one of them being online multiplayer.

We can say what we want about FIFA Mobile but we can’t take away the fact that it remains one of the best sports game on Android and iOS. While EA dominated the genre with FIFA 14 and 15, FIFA 16 came with its set of problems from compatibility and connectivity issues. In short, it was a much anticipated game that ended up becoming a flop.

It took EA some time to dust themselves and take Mobile platforms serious again after FIFA 16. And while the release of FIFA Mobile 17 and 18 weren’t enough to make players forsake PES, EA launched FIFA Mobile and it has ever since helped them get back on their feet. The game offers amazing visuals and real life player movements that are quite similar to the PC and Console versions.

Pro Evolution Soccer (now eFootball) and FIFA have dominated the sports genre on mobile for years. You just can’t compete with them. However, while Dream League Soccer is still far from touching shoulders with the likes of eFootball and FIFA, they’re getting there and getting there fast.

Dream League Soccer has amassed millions of players over the years and is one of the most played game on both Android and iOS devices. It offers really cool graphics and visuals, coupled with unique game modes, that you may have to purchase today when playing eFootball or FIFA.

After the success of its predecessors, Football Manager 2022 brings in even more features for players to enjoy. It is arguably the best Football manager game on both Android and iOS, and despite being a paid title, players can’t seem to get enough of the game.

Trade players, go head to head with opponents, compete in the market, raise youth team of future talents and strive to be the greatest football manager ever seen. If you’re one who enjoys strategic games and likes to take charge of a team, build them up and take them to victory, then this game is for you.

Despite being around for quite a long time, VTC made its way to mobile in 2017 and is simply one of the most advanced tennis games you’ll find on both Android and iOS. The game lets you make use of some of the most recognised tennis stars such as Roger Federer, Rafael Nadal and Novak Djokovic.

Can triple-A console gaming actually be ported to mobile and work well? Yes, and Grid Autosports is the proof. This is a single-player racing game that was first launched on PC and became a massive success. It arrived mobile devices and became the most graphically advanced racer on the platform. In this game, t’s all about the teams, the rivals and the intense races that take place in a new world of professional motorsport.

Players will experience the roars of the crowd and the squeal of big, fat and slick tyres over the smooth asphalt where every slight turn or drift is reflected in the superb movement sensation. There is currently no modern day racer on Android and iOS that quite captures the gorgeous idea and realism of driving a racing car like Grid Autosports.