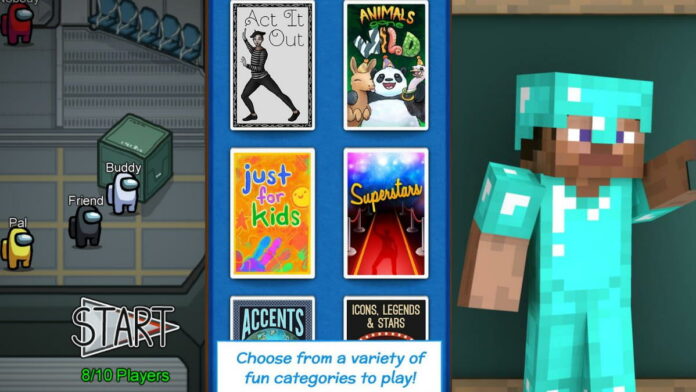 Keeping in touch with your friends is more important than ever nowadays. Taking phone calls, jumping in and out of video chats, and sending tons of text messages are becoming the norm, so why not unwind and relax with a couple of fun mobile games to play on your phone with friends?

Grab your phone and some buddies and get your next game night ready! Touch Tap Play is here with some of the best current mobile games to play with friends.

Mojang’s blocky crafting adventure hit has always been a staple of multiplayer gaming, and that still holds true today. Minecraft is popular with adults and kids alike, giving anyone with an open mind the creative freedom to build out their adventure however they like.

Minecraft features two game modes: survival and creative. Survival mode is the main show of the game, where players are dropped into a randomly generated world where they must build their own shelter before the creepy crawlies come out at night.

Creative mode is the more relaxed mode for players who simply want to build without having to worry about food and monsters. Players are given the ability to fly and have access to all blocks, enabling them to build whatever they like.

Minecraft is basically virtual Legos with a survival twist. For those looking for a challenge, surviving with your friends and building your own headquarters is always a blast. And for those looking to chill out, building a massive structure with buddies is a great way to unwind.

No doubt you have heard of this game by now, whether through the silly memes of the instantly recognizable characters, or through videos of people playing it with their friends over the internet. Either way, Among Us is one of the most popular multiplayer games around right now, and for good reason!

Among Us is a social deduction game for up to ten players locally or online. Ten players are in charge of running a spaceship smoothly by completing various tasks. Out of those ten players, two are imposters who are out to murder the entire crew.

Among Us will quickly make you question your friendships as players will lie, cheat, and wiggle their way to prove their innocence. Your significant other? They might be an imposter waiting to strike. Your family? They might be innocent, but why are they acting so shady? Who you trust is the key between life and death!

And that is what gives Among Us so much replayability – no two games will ever go down the same. Trust us, you and your friends will be hooked after one game!

Players will choose from a variety of colorful characters from the Mushroom Kingdom, from the mustached hero himself to the lovely Princess Peach. Mario Kart Tour features different tours that are themed after real world locations in addition to the regular Mario Kart inspired tracks.

With the multiplayer mode fully implemented, you can now create online lobbies for you and up to seven of your friends. You can set the rules and limits, but the tracks you play on are switched out every couple of minutes.

Nothing beats a fast and frantic Mario Kart race, and Mario Kart Tour is the perfect way to enjoy them!

Once used as a way to kill the time in long line queues, Heads Up! is still as relevant as ever. Warner Bros’ take on the classic game of charades is super fun, easy to get into, and perfect for a casual evening with friends over a video call.

Heads Up! puts one player from the group in charge of the phone, and all players will choose a category to act out or talk about. For example, the animal category will have the players act like silly animals and the phone player has to guess which animal it is.

There are all sorts of fun categories including ones where the players cannot speak at all and instead act out all of the descriptions. The game even includes an optional video recording mode, so after the game you can watch your friends do silly stuff!

For a mere dollar, Heads Up! can provide tons and tons of family fun.

The Jackbox Party Pack is a collection of different board-game style party games. As of writing, there is a total of six different packs each with their own unique games. The first four packs are 24.99, while packs five and six are 29.99 each.

The price may be a little steep for a mobile game, but the amount of fun you can have with each pack is priceless. Each pack includes around five or six different games that are easy to get into and play. While they are more aimed towards adult players, each game also has family modes that disable adult topics.

The games inside the packs all vary, so make sure you read about each one to see what you and your friends will like the most. “You Don’t Know Jack” is a straight up trivia game with a sharp tongue, while “Drawful” is a hilarious game of Pictionary with wacky drawing prompts.

One device will act as the “host” device, while players will connect using their browsers on a computer or phone. Each player will need a phone to play, so keep that in mind!

You might be familiar with Roblox if you have a younger sibling or child. If you took the creative freedom of Minecraft and inserted it into all sorts of different genres, you would end up with Roblox.

Roblox many games within one. You see, the game thrives off of a insanely large community of players who create their own game world within Roblox. Want to go an adventure through a hidden temple? Or do you want to shoot some zombies? Or maybe you want to take a heart-pounding trip through a haunted house?

The best part is that Roblox is completely free, and you can play just about any of the user-created games online with your friends. The game even encourages you to build your own worlds using the tools provided, for those interested.

Thanks to the simple Lego aesthetic, the game is very popular with the younger crowd, but adult gamers might get a kick out of it too. You never know what you will find on the game browser, so take a look!

And there you have it! Next time you have a gaming night with your buddies, try out any of these games for a good time. These are only a few of our favorites, and we know there are plenty of fun experiences out there, so if you have any other recommendations be sure to leave a comment below!