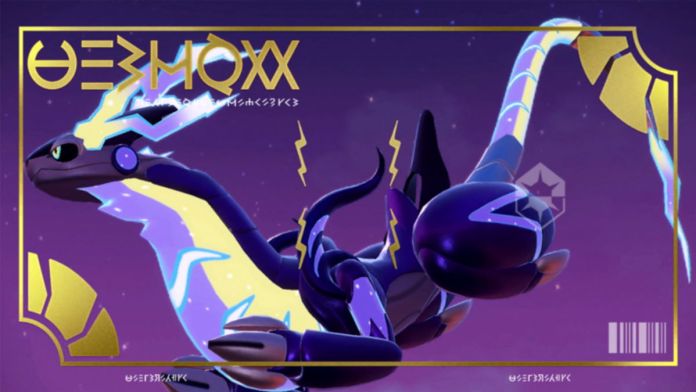 Miraidon is the flagship legendary dual-type Electric and Dragon Pokémon in Pokémon Violet. After you complete the main story and venture into the Great Crater of Paldea, you’ll be able to eventually use Miraidon in battle, in addition to its traversal capabilities. Today, we’ll show you the best Miraidon moveset in Pokémon Scarlet & Violet!

As to be expected from the game’s signature legendary Pokémon, Miraidon is quite the beast, packing very high stats in just about every category. Miraidon’s base stats are, according to Bulbapedia:

The only thing Miraidon is somewhat lacking in is Atk, so you should stick to using only special moves. This is compounded by Miraidon’s ability, Hadron Engine, which acts like Electric Terrain and also boosts Sp. Atk.

The best moveset for any given Pokémon will always be a bit subjective, so we’re going to list some of the best options for moves, then show some example builds. Let’s start with Electric moves!

Without a doubt, Miraidon’s best Electric-type move is its own signature move, Electro Drift. It has a base power of 100 with 100% accuracy, and it deals increased damage if it’s super effective against its target.

The only downside to it is that it has a base max PP of 5, so you may want to take a backup Electric-type move. Your options are Parabolic Charge, Discharge, and Thunder.

Parabolic Charge is a special Electric-type move that has 65 base power and 100% accuracy. When Parabolic Charge hits, the user recovers HP equal to half the damage dealt, making Miraidon a bit more sturdy.

Discharge is a more powerful Electric-type move, sporting 80 base power and 100% accuracy. It shines in double battles, as it can hit both Pokémon at the same time. It also has a 30% chance to paralyze foes.

Thunder is one of the strongest Electric-type special move, sporting a whopping 110 base power. Unfortunately, it has 70% accuracy, making it very unreliable. High risk, high reward!

Miraidon’s best Dragon-type move is Dragon Pulse. It’s a reliable move with 85 base power and 100% accuracy, making it a no-nonsense damaging move.

Miraidon does eventually learn Outrage, but it’s a physical move, so it doesn’t scale well with Miraidon’s stats. It also doesn’t gain any benefit from Hadron Engine.

For TMs, Draco Meteor is really your only other option. It boasts destructive power at 130 base power, with a decent 90% accuracy. However, it lowers the user’s Sp. Atk by two stages, so you’ll really only want to use it to finish off opponents.

Charge increases the damage of your next Electric-type move. It’s a bit overkill with Hadron Engine active, as it acts like Electric Terrain and boosts the power of Electric-type moves, but it’s there if you want it.

Metal Sound reduces your target’s Sp. Def by two stages. It has 85% accuracy, making it a bit unreliable, but it’s good for opening your opponent up to Miraidon’s devastating special moves.

Mirror Coat can be a good counter against Pokémon specializing in special moves. Once used, if the user is hit with a special move, Mirror Coat will counter with double the damage.

Overheat and Hyper Beam can be used for more type coverage, if needed.

Now that we’ve gone over some of the best moves for Miraidon, we’ll talk about potential movesets. Here are some example movesets, but feel free to change moves around.

This is a general, all-purpose moveset for Miraidon. With Hadron Engine, Electro Drift will hit like a truck, thanks to the Electric Terrain effect and the Sp. Atk boost. If or when Electro Drift runs out of PP, you can use your backup Electric-type move for more damage.

For miscellaneous moves, you have some options. Charge before Electro Drift makes it hit really hard, and Metal Sound can open your enemies up to all of Miraidon’s special moves. Mirror Coat gives you some extra defense, on the small chance you might need it.

That concludes our guide on the best moveset for Miraidon in Pokémon Scarlet & Violet. What are some of your favorite moves for Miraidon? Let us know in the comments below!