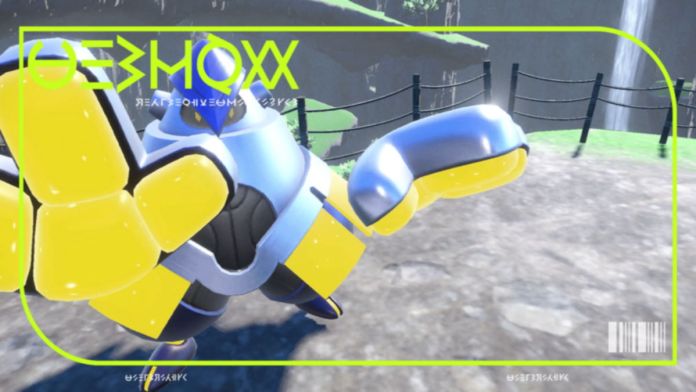 After you venture into the Great Crater of Paldea, you’ll find yourself in the mysterious Area Zero, full of Pokémon that are from a different time period. These so-called “Paradox Pokémon” can only be found in Area Zero, and they’re some of the strongest Pokémon you can catch in Scarlet & Violet. Today, we’ll show you the best Iron Hands moveset in Pokémon Scarlet & Violet!

One of the Paradox Pokémon is Iron Hands, a dual-type Fighting and Electric Pokémon, who seems to be Hariyama’s distant future cousin. Iron Hands is completely cybernetic, tremendously enhancing its physical strength. Just check out its base stats to see for yourself:

Iron Hands is a physical beast, boasting high HP, Atk, and Def. Its only weakness is special moves, so you have to be careful around those.

The best moveset for any given Pokémon will always be a bit subjective, so we’re going to list some of the best options for moves, then show some example builds. Let’s start with Fighting moves!

At level 91, Iron Hands’ learns its last Fighting-type move, Focus Punch. Iron Hands concentrates for one turn, then unleashes a mighty attack on the next turn automatically that hits with 150 base power and 100% accuracy.

Focus Punch is an incredibly strong move on its own, but Iron Hands’ gets STAB (Same type attack bonus) from it, making it pretty much capable of one-shotting any Pokémon that isn’t resistant to Fighting-type moves.

However, Focus Punch has a severe weakness: If the user is hit while charging, they’re interrupted, and must start the process over again. This can make Focus Punch a bit unreliable for aggressive opponents.

You may want to take a backup Fighting-type move. Close Combat is a good choice, as it is almost as strong as Focus Punch.

Unfortunately, Close Combat also reduces Iron Hands’ Def and Sp. Def by one stage, which is incredibly dangerous if it gets hit by a special move.

If you don’t want to risk it, either Force Palm or Seismic Toss are good Fighting-type alternatives. Force Palm has a chance to paralyze, and Seismic Toss does more damage the higher level the user is.

Wild Charge is a physical Electric-type move that has 90 base power and 100% accuracy. While it does great damage, the user suffers recoil damage, which is equal to 1/4 the amount of damage Wild Charge caused.

Thunder Punch is a no-nonsense Electric-type move that has 75 base power and 100% accuracy. While it’s not as strong as Wild Charge, it has a chance to paralyze its target, which is great when going up against Pokémon with special moves.

You can’t go wrong with either choice. If you’re worried about durability, Thunder Punch is the safer choice, but you can’t deny the sheer power of Wild Charge!

Iron Hands’ biggest vulnerability is its low Sp. Def. Even if it gets hit by a type that it’s resistant to, it might still hurt a bit if it’s a special move. Your focus here should be to get moves that can prevent foes from acting.

As such, Detect is one of the best utility moves you can take. Detect functions exactly like Protect, which nullifies any move against the user for a single turn. It has a chance to fail if used in succession.

Belly Drum is a bit overkill, but it essentially guarantees that Iron Hands will be one-shotting anything. The user’s HP is cut in half, then their Atk is boosted by six stages, maxing it out.

Focus Energy increases the user’s critical hit ratio. If you’re planning on taking Belly Drum, you probably don’t need to worry about this, but it’s helpful early on.

Charge doubles the damage of the user’s next Electric-type move. Good for Thunder Punch and Wild Charge, but again, unnecessary if you’re planning on picking up Belly Drum.

Heavy Slam is a Steel-type physical move that gives some more type coverage to Iron Hands. This move deals more damage depending on how much the user outweighs its opponent, and Iron Hands clocks in at a whopping 839 lbs, making it extremely heavy.

Electric Terrain is a special case. When used, it temporarily changes the battlefield to electricity, powering up all Electric-type moves. All the futuristic Paradox Pokémon have an ability called Quark Drive, which activates when Electric Terrain is in effect.

When Quark Drive activates, the Pokémon’s highest base stat will increase even further. This means that Iron Hands’ monstrous Atk stat goes even further beyond, so its physical Electric-type moves will hit as hard as its Fighting-type moves.

Now that we’ve gone over some of the best moves for Iron Hands, we’ll talk about potential movesets. Here are some example movesets, but feel free to change moves around.

Since Iron Hands has lots of options for physical attacks, you can build its moveset in a variety of ways. Here’s the “all in” moveset, where you use nothing but heavy hitting attacks while boosted up thanks to Electric Terrain and Belly Drum.

Alternatively, if you want to play a little safer and reserved, you can take the attack options that don’t put you directly in harms way. Thunder Punch and Force Palm have a chance to paralyze their targets, making them deal decent damage while also being defensive.

Although you won’t have Belly Drum, you’ll have Detect, which can save your butt if you’re up against Pokémon that specialize in special moves. With Electric Terrain, Quark Drive will activate, and your moves will deal a lot more damage.

That concludes our guide on the best moveset for Iron Hands in Pokémon Scarlet & Violet. There are plenty of ways to build the Paradox Pokémon, so what are some of your favorite moves for Iron Hands? Let us know in the comments below!