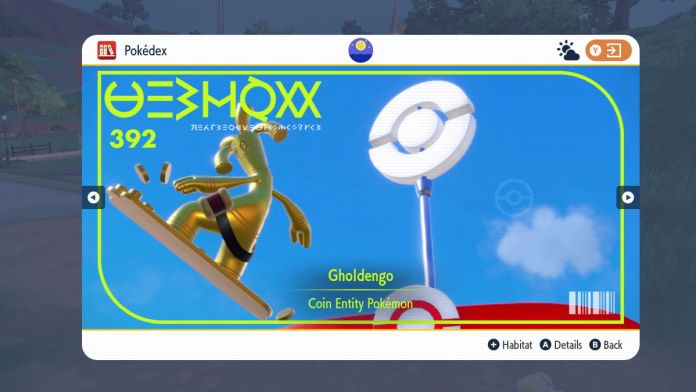 A fun new Pokémon added in Pokémon Scarlet & Violet is Gimmighoul, a Ghost-type Pokémon. It sits around in a conspicuous chest, and it’ll attack anyone that tries to open it. In order to evolve it to its final form, Gholdengo, you’ll need to collect 999 Gimmighoul Coins across the entire region of Paldea. Today, we’ll show you the best Gholdengo moveset in Pokémon Scarlet and Violet!

Gholdengo is the dual-type Steel and Ghost evolved form of Gimmighoul, those rare chests you can find around Paldea. We’re sure you’ve collected a few Gimmighoul Coins after journeying in Paldea for a while—you’ll need 999 of them in order to evolve Gimmighoul into Gholdengo. Here are Gholdengo’s base stats, according to Bulbapedia:

Gholdengo has low Atk, so you’ll want to use only special moves with it. Its HP and Def stats are pretty good, so it can take a few hits before you should start worrying.

The best moveset for any given Pokémon will always be a bit subjective, so we’re going to list some of the best options for moves, then show some example builds. Let’s start with Steel moves!

There’s really no contest here, as Gholdengo learns its own signature Steel move, Make It Rain, which has 120 base power and 100% accuracy.

Make It Rain deals massive damage, thanks to its high base power and it being a special Steel-type move. Additionally, it lowers your target’s Sp. Atk by one stage.

Make It Rain also has the added benefit of giving you bonus money if you’re battling a Trainer. You can rake in the dough if you’re also holding an Amulet Coin.

The only problem with Make It Rain is that it has a base max PP of 5, so you’ll want to use a PP Up on it or take another Steel move for Gholdengo.

Through the use of TMs, Gholdengo can learn Flash Cannon and Steel Beam. If you want to have a backup Steel move for Gholdengo, these are your two best choices.

The best Ghost-type move for Gholdengo is easily Shadow Ball, learned at level 35. It’s a Ghost-type special move that has 80 base power and 100% accuracy.

Shadow Ball is especially nice for Gholdengo, and it has a chance to decrease the target’s Sp. Def by one stage, further opening up the target to Gholdego’s high Sp. Atk.

Alternatively, if you’re planning on taking Confuse Ray, you can also take Hex. Hex is a Ghost-type special move that deals more damage if your target has a status condition on them.

Gholdengo doesn’t learn too many moves overall, but it does learn a lot of auxiliary moves that you can use at your own discretion. Here are a couple of recommendations.

As mentioned earlier, Confuse Ray is a reliable way to confuse your target. It doesn’t miss under normal circumstances, and it can be used in conjunction with Hex to deal lots of damage.

Substitute can be used if you’re afraid of taking too much damage. Gholdengo is weak to Ground, Ghost, Fire, and Dark, so Substitute might be able to help you last longer.

Metal Sound reduces your target’s Sp. Def by two stages, further rendering them vulnerable to special moves. This move has 85% base accuracy, so it’s a bit unreliable.

Recover is great in just about any situation, as it allows you to restore lost HP. If you’ve got a free space, consider taking Recover.

Nasty Plot raises the user’s Sp. Atk by two stages. This is effectively the same thing as Metal Sound, but you don’t have to worry about missing.

Now that we’ve gone over some of the best moves for Gholdengo, we’ll talk about potential movesets. An example moveset would be something like this, but feel free to change moves around.

This is an all-in moveset. Use Nasty Plot as much as you can, and then blow your opponent away with Shadow Ball or Make It Rain. If you need more defense, you can take Substitute or Recover instead of a third attack move for more protection.