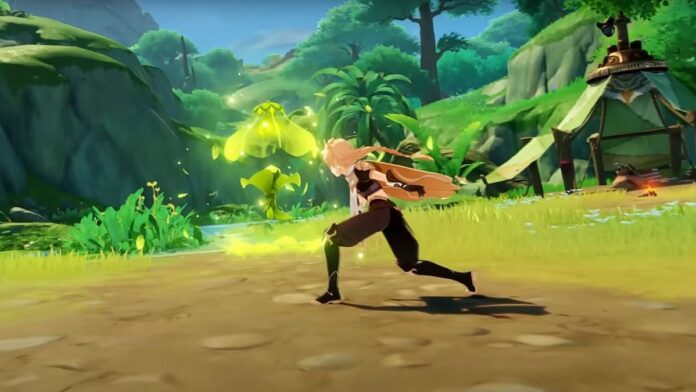 With Genshin Impact 3.0 update, HoYoverse has introduced Sumeru, a new region filled with warm deserts and lush forests. This update finally added the long-teased Dendro element to the game. Travelers can gain the power of Dendro by resonating with any Statue of Seven from the Sumeru region. This guide shares the best builds for Dendro Traveler in Genshin Impact 3.0 update.

Like other Traveler variants, Dendro Traveler also shines as a supporting character in Genshin Impact. Players can also use Dendro Traveler as DPS because of high scaling on skill and burst as well as new Dendro reactions such as Spread.

Let’s look at both support and DPS build for Dendro Traveler:

For a support build, the 4-piece Deepwood Memories is the best artifact seed. The 2-piece effect grants a 15% Dendro DMG Bonus while the 4-piece set reduces the Dendro resistance of enemies hit by elemental skill or burst.

The 4-piece Noblesse artifact set is also a decent option for Dendro Traveler. It is a generic artifact set for almost every support character in Genshin Impact. As for artifact stats, players should try to get the following:

As for artifact stats, players can use the typical ATK% sands, Elemental (Dendro) goblet, and Crit Rate/ Crit DMG circlet. Players should also look out for ATK%, ER%, and Crit stats in sub-stats.

Running DPS swords like Mistspitter Reforged, Jade Cutter, Blackcliff Sword, etc., will help Traveler achieve high Dendro DMG in Genshin Impact. This completes our quick guide to Dendro Traveler builds. If you have any doubts, feel free to ask them in the comments!