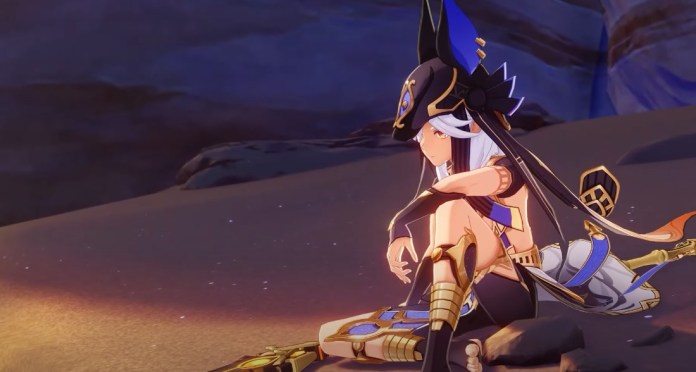 With the release of Sumeru, Hoyoverse introduced Dendro, the seventh and final element, to Genshin Impact. Dendro has brought many new reactions like Spread, Aggravate, Bloom, etc. Hoyoverse has also released characters focused on new Dendro-based reactions, such as Tighnari, Cyno, and Nilou. This Genshin Impact guide will tell you how to build Cyno as a DPS character.

Let us look at the best weapons and artifacts for Cyno in Genshin Impact:

Staff of the Scarlet Sands is the best weapon for Cyno in Genshin Impact. It provides a whopping 44.1% Crit Rate and has a passive effect of boosting Cyno’s Attack based on his Elemental Mastery. However, it is a limited 5-star weapon, and thus many players won’t have it.

Other than Staff of the Scarlet Sands, the following weapons are also great for Cyno:

Farming a decent 4-piece set can take quite some time. Meanwhile, players can use 2-piece combinations of the following artifact sets:

Cyno’s ideal team always includes a Dendro character for applying Dendro onto enemies. While creating a Cyno team, players should remember that his elemental burst can have up to 18 seconds duration. Be sure to have support characters who can last for that long.