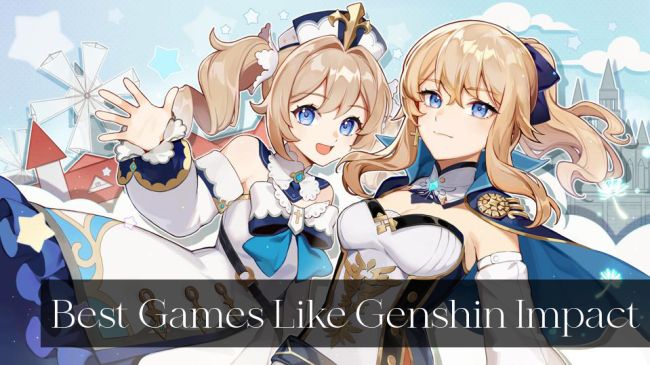 If you’ve played Genshin Impact, you probably noticed just how addictive it is. The game has entertaining battles, a collection of different characters each with their own combat style, and stunning graphics. But that’s not everything – the game is an immersive open-world, where you can collect, fight, climb, and explore everything you can see (or almost everything).

All of these features make the game pretty much a masterpiece of mobile games, which definitely keeps players (myself included) glued to the device. And if you’re anything like me, you might wonder – are there any other games like Genshin Impact for mobile?

There are many amazing similar games you could play, so if you want to explore other options, make sure you check out our list below:

If you’re familiar with miHoYo’s creations, you probably know already that Honkai Impact 3rd is another game produced by the same developer. If you didn’t know that, you’re in for a big surprise. This game has a similar style to Genshin Impact, sharing the same stunning anime art style and well… the fact that they’re both an impact.

Do you like action-packed battles and anime games? Then I definitely suggest giving Honkai Impact 3rd a try! Before you ask – no, it is not related to the storyline in Genshin Impact. But it’s the closest you could get in terms of playstyle and graphics. Oh, and let’s not forget about the gacha system.

If you want a terrific open-world game where you get to decide everything to the point of your character’s personality, Dragon Raja is the answer. Right off the bat, I need to mention that this game has one of the most extensive character customizations that I’ve ever seen in a mobile game. It goes as far as to (almost) match the one in Black Desert Online!

As for the gameplay and storyline, the game’s extremely well-made and flows super well with all of your character’s actions. The graphics are top-notch, and you can see that the minute you start the game. If you didn’t give this game a try yet, I definitely suggest you do so ASAP. Who knows – you might end up liking it even more than Genshin Impact!

Are you looking for a game similar to Genshin Impact, but with a gacha element a little bit more present? Then Night Agent: I’m the Savior is a great alternative. In this game, you can experience exactly that. You can summon characters and use their repertoire of unique spells to fight enemies and enjoy the fun interactions all throughout the game.

While it’s not an open-world type of game, you will have some great anime graphics and special moves to keep you entertained. However, I am sure that the hack&slash element will be more than enough to make the battles as enjoyable as they are in Genshin Impact.

Dragalia Lost has plenty of elements that make the game quite similar to Genshin Impact, but it has its own perks that make it unique. For instance, you can transform into dragons! The gameplay is slightly different, but if you love Paimon, then you’ll love the characters in Dragalia Lost (as they all follow a chibi-ish style).

The game’s storyline is super catchy and easy to follow, so if you’re someone who usually spends hours following the plot, don’t worry. Dragalia Lost does a great job of embedding that into the game in a very simple and fun way.

Furthermore, if you love trying your luck at gacha summons in a game, you’ll have the time of your life doing it in Dragalia Lost. Take my word for it – the 5-star rates are great (when compared to other games at least).

This game has some very amazing features, that make it a great choice or all gamers who want a high-quality game for the buck they pay. It might seem a little bit outdated when you compare it to Genshin Impact and the like, but it’s a well-made game nonetheless.

The goal of the game is pretty simple – you recruit Monsties (a.k.a. the monsters whom you can interact with), bond with them, and even hatch new ones. Then, you can use their help to fight enemies and other players and prove how strong your lineup is.

Overall, the game seems pretty simple, but once you start playing you’ll see that it’s much more than that. And it’s fun!

Although it might not seem that way, Assassin’s Creed Identity is quite similar to Genshin Impact from a few points o view. Both of the games let you choose a character you can work on to improve their strength, you get to experience some really high-quality graphics, you can climb stuff and fight your heart out – or complete puzzles.

The main difference between the two, if you’re not familiar with the Assassin’s Creed franchise, is that in one you play as a fearsome assassin while in the other you play as a totally innocent character who is just trying to find their twin. It’s not… such a big difference if you ask me!

All jokes aside, if you’re captivated by the action-packed quests from Genshin, you can experience something similar in Assassin’s Creed Identity. The graphics are amazing, and I guarantee that you’ll love this game once you purchase it and start playing.

Purchase the game for $1.99 for Android and iOS.

Crashlands is a super fun game if you’re a lover of the pixel art games, just like myself. The game is as close to an open-world type of game as you could get from the genre – it’s got an immense planet of quests for you to complete, and hordes of monsters to defeat.

All things considered, although it might seem like the furthest game from Genshin Impact, it’s actually not all that different. You can customize and upgrade your character in the same way that you would in any RPG, and even better – build your own house!

So, if you want to take a breather from your typical day-to-day, Genshin Impact activities, you could relax with Crashlands and enjoy a similar experience as seen from pixel-lens glasses!

Purchase the game for $6.99 for Android and iOS.

These would be our picks for the best games like Genshin Impact that we’ve got for you right now. What other games do you consider to be similar to GI and why? Let us know down in the comments section below!