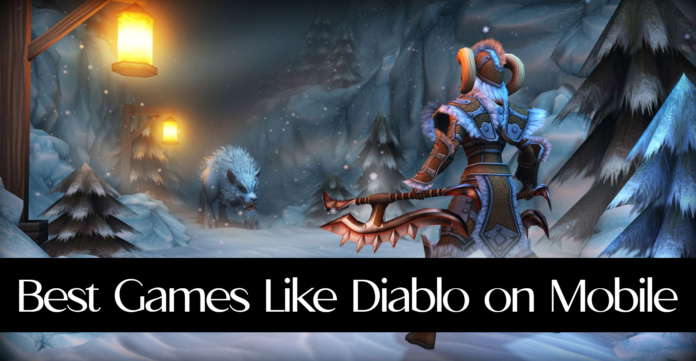 Diablo has been a game that I really enjoyed in the past but has gained quite a lot of backlash and boo’ing for their Diablo: Immortal launch (and I kinda understand it). However, Diablo is not the only ARPG out there.

There are tons of other great games, that are specifically intended for the mobile platform, and which do a great job of immersing you into that reality. I’ve compiled a list of the best games like Diablo for Mobile so that you can enjoy some fun alternatives.

I’ve probably spent one too many hours in Eternium – this ARPG is so good, that it will just draw you right in, the moment you start playing. It’s a great game overall, with easy controls, a fun color scheme, and three main classes you could play (mage, warrior, and bounty hunter) depending on the weapon of your choice.

The best part about Eternium, however, is the fact that you can be a f2p player completely. You don’t have to spend a single dime on the game and any in-game upgrades. As long as you keep doing your quests and progressing, you’ll be rewarded with everything you need to create a strong character.

If you are looking for a game to really dedicate to and spend a lot of time in, then Inotia 4 is a great choice. You will have 6 classes to choose from (Black Knight, Assassin, Warlock, Priest, and Ranger) and a ton of maps to explore.

Inotia 4 is not exactly your typical ARPG, but rather a semi-action RPG, if I may be allowed so say so. It’s similar to Diablo in a way that you advance through various dungeons, and you have a wide variety of enemies, equipment, and such.

It’s entertaining if you like non-realistic games – and by that, I mean that the game tends to lean more towards the chiseled pixel-graphic style. However, the main drawback of this game, as many other players would agree with me, is the control system.

But if you’re able to get past that, you got yourself a very immersive and fun game to spend your time in.

Dungeon Hunter 5 is definitely a game that I’ve had a lot of fun playing. Its graphics are great and quite colorful, to be frank. The battle system is clean, and you can make quite a lot of upgrades.

However, the downside would be that it’s quite repetitive once you reach a certain stage. But, if that’s not an issue for you, then it’s definitely worth giving it a shot. Another element that I was not quite fond of is the p2w in some late-game scenarios, so keep that in mind (if you’re not up for spending money in a game).

Bastion is truly amazing – this ARPG has some unique, high-quality graphics, which give you a completely different vibe than the one you get while playing Diablo. It’s leaning more towards a cartoonish style, which honestly I don’t mind at all! It just goes great with the overall feeling of the game.

Furthermore, Bastion has an element that makes it unique – a narrator, who follows your every move. Sadly this game is not available for Android, so if you want to enjoy it, you can only purchase it from Steam (and play it on the computer) or download it for your iPhone or iPad.

Either way, if you like ARPGs, you should definitely give this one a try!

In Zenonia® 5 you have four classes to choose from when making your character: the Berserker, the Mechanic, the Wizard, and the Paladin. They’re all equally good, and each of them is tailored to fit a certain playstyle.

The game is pretty much exactly what you’d expect from an ARPG. You have countless dungeons, instances, and even mass PvP where you can fight other players. It’s similar to Inotia 4 from a graphics point of view, but there are clear differences between the two.

Another thing worth mentioning about this game is that after a while, you might fall into a routine where you have to do the same instance over and over again to progress. That might be a drawback (depends how you see it), but if you don’t mind, then you’ll have no issues enjoying the gameplay.

Could you imagine a game that combines graphics similar to the ones in World of Warcraft, and an ARPG style like in Diablo? Neither could I until I checked out Arcane Legends. This game is extremely fun, packed with quests and battles, and more.

If you’re trying to find a game that is perfect for playing in your spare time, then relax, kick back and just enjoy the adventure in Arcane Legends. You can play three classes, which is fairly basic for an ARPG, but they’re more than enough.

You have a ton of quests and dungeons where you can spend your time, and the best part – you can even play it offline. So, while it’s lacking in the gore element, it definitely makes up for it with other stuff and a rather “cute & cartoonish” choice of graphics.

If you want a high-quality game with a hint of Diablo, then the Book of Demons is a great choice. In this game, you have really, and I mean REALLY amazing graphics (in my opinion), smooth gameplay, and tons of content to keep you busy for days.

Sadly, it’s also part idle clicker, so if you’re not really a fan of it, it might not be the ideal game for you. Nonetheless, every element of this game is perfectly balanced. I definitely suggest buying the game and giving it a shot, because it’s one of those games that once you start playing, it will be very difficult to close it.

Keep an Eye Out for Path of Exile Mobile!

Sometime in the future, Path of Exile Mobile will be released.

PoE is one of my favorite ARPGs and games that resemble Diablo – I have over 2000 hours in the PC game, and I expect the mobile version to be just as good! So, stay tuned because we’ll keep you posted as soon as it launches.

These would be my picks for the best games like Diablo on mobile. Do you have some suggestions for fellow players? Feel free to share them down in the comments section below!