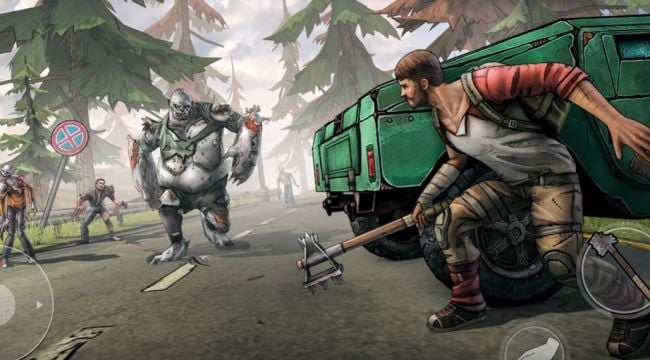 There are so many types of survival games out there, so it was not easy to pick a few and mention which are the “best” because they all differ in many ways – but I’ve done it! I did pick a handful of games and some of the titles here have definitely kept me playing for one too many days!

So without further ado, here is our list of all the best free survival games for Android and iOS that you can try out today:

Maybe you are already familiar with this game, or maybe not – either way, this is one of the best survival games on mobile out there! From really good graphics, to a smooth and easy gameplay, you will be able to take part in massive PvP battles and prove your worth.

In this game you can go battle in 100-player big fights, and try to survive, becoming the last man standing – it’s not easy! The game has a lot of features, from different terrains, maps, weather types and much more!

Give it a try and you’ll see what I am talking about!

You can download PUBG Mobile from Google Play and App Store.

This is one of my all-time favorite survival games out there. And putting my bias towards pixel games aside, this is truly a beautiful game which can keep you on your toes at all times!

You will have to survive in a world infested with zombies, fight your way through, craft and become stronger, equipping better weapons! Fury Survivor: Pixel Z is a game which is not only well made, but its pixel graphics add to the fun that is this zombie mass-destruction games!

If you were to pick one game to play through the day, then this should be it!

You can download Fury Survivor: Pixel Z from Google Play and App Store.

Another game where you either do your best to survive – or you die. This game is meant to keep you playing it non stop – you will have tasks such as keeping your hunger and thirst in check, you can build your own survival hut and many more fun features.

I really suggest that you give this game a try if you are into exploring, constructing and collecting. It’s really fun and you will get to do everything that you probably expect a good survival game to have!

You can download Day R Survival from Google Play and App Store.

Another pixel game makes an appearance on this list. Are you surprised? Well, you shouldn’t be! There are some pixel games out there which make the survival genre really something that you will look forward to playing.

Pixel Survival World is a sandbox survival game where you fight for loot, fight for survival and fight for pretty much everything! You can try out all the different game modes, and try to get some of the rarest most valuable loot in the game!

You can download Pixel Survival World from Google Play and App Store.

While this is not your typical survival game, The Bonfire: Forsaken Lands is a game which lets you make choices which should lead to your survival. Here, you can craft, build, and discover all kinds of stuff hidden throughout the game.

The game is an indie game with very good and simple graphics which will not take away from the game’s interesting story and gameplay.

If you are looking for a non-conventional game which is played more in words than with anything else (you’ll see what I am talking about), then you will definitely have a blast trying this one out. I really suggest that you at least give it a try!

You can download The Bonfire: Forsaken Lands from Google Play and App Store.

Another survival game where you have to craft your own shelter, scavenge and hunt for food and much more. In Last Day on Earth: Survival you are in charge of surviving the harshest of times!

So find, loot, and craft all that you can to survive the apocalypse! It’s best that you craft your shelter as safe as possible, and put together some farms to have some sources of food for the harsh times!

You can download Last Day on Earth: Survival from Google Play and App Store.

If you are looking for a more than beautiful survival game, with hints of MMORPG, then this game will definitely be one which you can enjoy to the fullest. If you know what the perks of a MMORPG are, then you combine them with the difficulty of a survival game, then you have your answer.

Stormfall: Saga of Survival is definitely a game which has a beautiful story, a lot of things to work towards in the game, and more than anything, some graphics which will make you think that you are watching a movie (well, more or less)!

You can download Stormfall: Saga of Survival from Google Play and App Store.

This game is one which you can play for hours on end if you don’t get too outraged by the zombies coming at you! Mini DAYZ: Zombie Survival features randomly generated maps filled with loot, with zombies and with all kinds of stuff that you can destroy!

The graphics are pretty (pixel graphics after all), the controls are fairly simple once you get used to them, and the gameplay itself is one which has plenty of action, so if that’s what you are looking for, then this will be the game for you!

You can download Mini DAYZ: Zombie Survival from Google Play and App Store!

Have you ever dreamed about living in the Wild West? Well, it’s not easy! And surviving there is even more difficult! In Westland Survival you have all the tools at your disposal to do so – but, can you do it?

While you are playing the lone ranger and fighting robbers, gangsters and looting for better items, you have mainly one goal: to survive this harsh world. So do your best, and become one of the best and strongest legendary rangers that ever existed in the Wild West!

You can download Westland Survival from Google Play and App Store.

Very similar to many other titles in the list, this game follows pretty much the same mechanics and gameplay, but everything is placed into a dark fantasy world.

Having plenty of weird and powerful evil creatures coming to get you, all that you need to really focus on is getting enough food, water and resources for thriving in some of the toughest situations.

These would be the names on our list of the best free survival games for mobile. Do you know some more interesting titles that you would like to add to the list and share with the others? Feel free to leave them down in the comments section below!