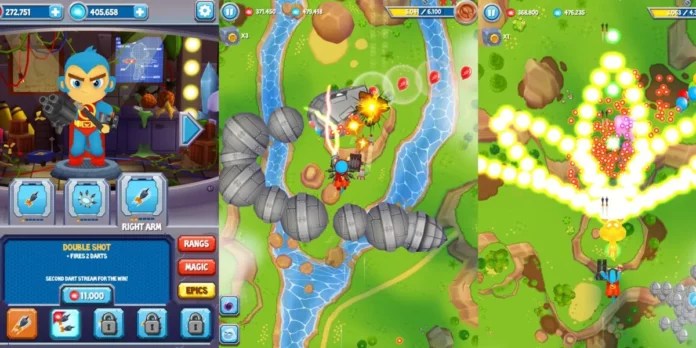 Bloons Supermonkey 2 can be played with a lot of different builds, some of which may not be as great as the others. Today we will be talking about the (objectively) best build, in our opinion, and the best way to run it.

First of all, Solid Doom is the most powerful core upgrade in the game. It has immense popping power, a high fire rate, and quite a wide range for coverage. Spikey Burst (Darts) is a close second and quite powerful in its own right but it requires more careful positioning and has trouble with lead bloons. All of the other core upgrades are limited either in terms of range or popping power, or are simply inconsistent.

As for the arms, Spikey Shots (Darts) is very powerful and can clear out dense groups of bloons and ceramics as well. Triple Snowflakes (Ice) is also very good for the same reasons, although it can’t pop white or zebra bloons, which are quite common. All of the other arm upgrades have significant drawbacks.

Thunder Wings (the Storm epic) is especially useful for dealing with the large rolling wheels that pop up from the bottom of the screen. The wings last for about 10s and also take approximately 10s to recharge, so if the activation is timed properly, players should be able to alternate between left and right for good coverage throughout the entirety of these levels.

If players do not have Doctor Monkey, either of the following choices are acceptable alternatives:

As is standard with most of these mobile games, after completing levels, players need to make sure to watch an advertisement to double their rewards.