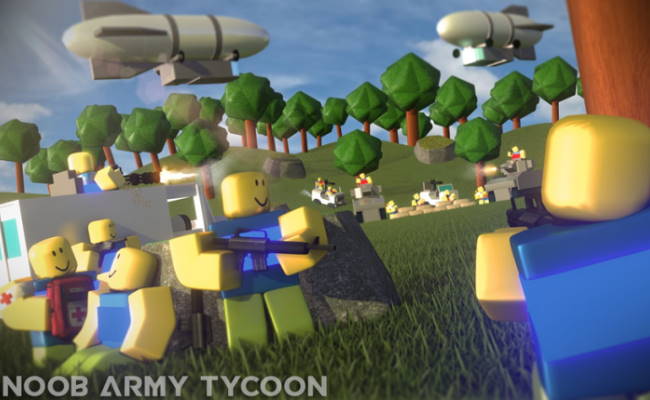 Noob Army Tycoon is a Roblox game where players build their own army base from the ground up. Hire workers, generate income, then purchase and train ground units, vehicles, aerial ships, and more! There are a lot of units to choose from, so we’re here today to help you pick the best of the best in our best army in Roblox Noob Army Tycoon guide!

You can only have one of these guys in your army, and for good reason: they can heal up damaged vehicles. You should always have a repairman in your army, as they can help your vehicles stay in the fight for longer.

Combat Medics can heal other noobs just like the Medics can, but they can also fight back too. Have at least two or three Combat Medics in your group for extra toughness.

Rocketeers are the best long-range noob units. Out of all the noob units, they deal the most damage. Heavy Minigunners have the potential to dish out more damage, but they usually get gunned down before they can get in range.

Heavy Minigunners can deal insane damage if they can reach their target. Their main weakness is their short range, so you’ll need to cover them with Combat Medics and Heavy Gunner Shields.

Fire Noobs deal the most damage out of all the super noobs. They’re also pretty durable, so when paired with some Combat Medics they can last quite some time.

Juggernauts are great tanks. They have lots of health and are equipped with a short-range shotgun, making them effective at close ranges. Just like the Fire Noob, they’re best paired with some Combat Medics.

AMRLs are long-range missile launchers. They deal amazing damage, and they can out range just about any other vehicle and unit in the game. They’re vulnerable to close-range units, so make sure they’re protected.

TMRLs are short-range missile launchers. Instead of bombarding faraway enemies with long-range rockets, they prefer to shoot missiles directly at their targets. Pairing them with AMRLs makes the perfect combo!

VRLAAs are invaluable for taking down air units. You should always expect your enemies to use strong air units, and if left unchecked, they can wipe out your entire ground force. VRLAAs are your best option for anti-air.

The Helicopter Rocket Launcher is the perfect universal air vehicle. It excels at air-to-air combat thanks to its missiles, and they’re also effective against ground units.

The Heavy Bomber Plane packs excessive power within its bombs, able to wipe out an entire ground force with one bomb. The Heavy variant is stronger, but a lot slower, so it must be protected.

If your enemies are using a lot of boats, the Destroyer is the way to go. The Destroyer can only attack naval ships, but it’s the best at doing so. You can easily shut down an entire fleet with a few Destroyers!

Those are what we think are the best units in the game. If you have any other suggestions or opinions, let us know in the comments below!