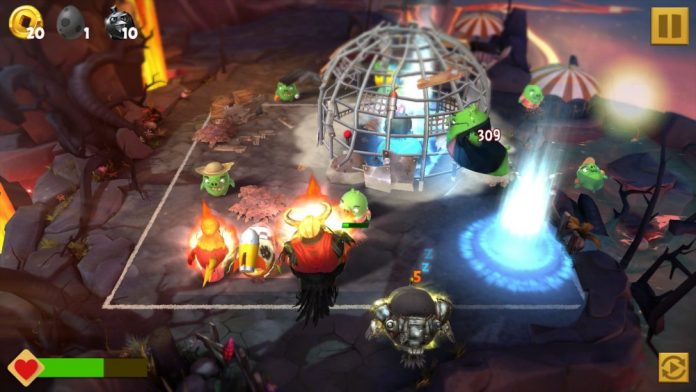 A new Angry Birds game is now available on mobile and this one is insanely addictive and fun! Angry Birds Evolution is the name of the game and you have so much content and stuff to do that you’ll probably get lost as soon as you start playing. But we’re here to help with our complete strategy guide: Angry Birds Evolution cheats and tips to help you become a better player and get the most out of this amazing game.

No matter if you’re a beginner who just started playing the game or you’re an experienced player, our tips and tricks will surely come in handy. We might even have a few things you didn’t know already, so let’s talk strategy in our Angry Birds Evolution tips and cheats article below!

Each new star a bird gets makes it a lot more powerful than the lower star one. For example, a two star bird at level 1 is stronger than a 1 star bird at level 9. Therefore, you should always focus on leveling up your rarest birds!

NOTE: Things have changed a bit and now scout missions disappear if you don’t complete them. So unlock them and complete them, there’s no easy way!

It doesn’t hurt to focus on the Scout missions early on as they are extremely easy and help you upgrade your team even faster. Plus, you get the chance to bring in powerful players’ birds for free which offer a major boost and make everything even easier.

Pro tip: When you clearly overpower your opponent, enable auto play by tapping the icon in the lower right corner. This way, you can mind your own business while you progress through the game.

How to make more money in the game
You need a lot of coins to level up your birds, so here are some of the methods you can use to get more money in Angry Birds Evolutions fast:

How to Unlock Bird Abilities
Every bird in the game, no matter how many stars it has, comes with their own Leader ability. In order to unlock that, though, you just need to progress through the campaign levels. When you reach the White Mountains, to be precise, you will unlock your birds’ Leader abilities and you’ll have even more things to consider when building the perfect team.

Save your Hatching Tickets!
You would be tempted to use your tickets for hatching eggs as soon as you have them, but it might be wiser not to do so. In the past, there were events that increased the chances of getting rare birds from hatched eggs, so you might want to save them in case such special events will make a comeback. You should normally get a ton of birds from playing the game anyway, so sticking to several tickets until they matter shouldn’t be too much to ask.

Increase your inventory!
Getting 200 diamonds is not an easy task in the game, but it will be done eventually. Save all your diamonds in order to spend the money on increasing your inventory by 10 slots. You’ll really need that later on in the game when you’ll need more birds of the same color for different missions. Trust me, it’s worth the wait!

How to win all battles in Angry Birds Evolution
Now that we know all the generic things about the game, it’s time to get to the fun part: destroying pigs! This is sometimes easier said than done, but if you keep a few things in mind, you will do very well:

– select the best possible team when sending them to battle. Rare birds of a high level are always better, but try to have in mind their skills and actual powers. Early on, this won’t matter much, but later on when you’ll get the chance to choose from multiple birds and the difficulty level increases, choosing the right birds for the job will become vital.

– the order in which you attack is important! Attack with your birds based on the damage they will deal, especially when talking about Special attacks. Make sure that whenever you use a special attack, you will cause maximum damage to as many birds as possible. Therefore, if needed, try to use other birds before to group pigs together for a Special Attack.

– attack from the back whenever possible as this deals more damage. This is a difficult mechanic though, but if you are able to pull it off every now and then, things will be easier.

– focus on destroying Pigs one at a time. Take the low health ones first as they are usually the ones attacking more often, or do an estimation of the damage they would deal and try to take them out before they’re able to hit. The goal is to try and take out as many pigs as possible as fast as possible as opposed to dealing damage to all pigs, but having them on the board.

These would be our tips and tricks for fellow Angry Birds Evolution players for now. We’ll have more advanced guides and content related to the game published soon, so make sure you check back often to stay updated.

Also, if you have some tips and tricks of your own, don’t hesitate to share them with us in the comment section below!