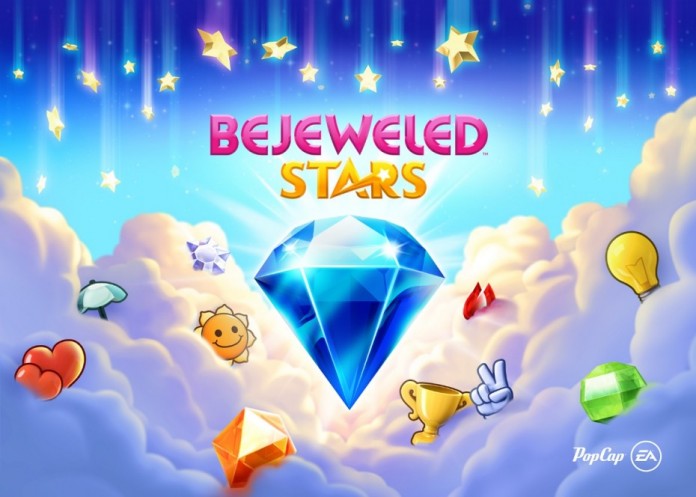 One of the biggest influences in the match-3 genre, Bejeweled, has returned in an all-new game! Bejeweled Stars takes the beloved puzzle series and sends it into the sky! Taking on a new Candy Crush-like experience, Bejeweled Stars has you solve through pre-determined layouts with a limited move set. Experience a new kind of Bejeweled with all new powers, mechanics, and more! We’ll help you reach for the stars and land high scores with our Bejeweled Stars cheats, tips and tricks strategy guide to getting high scores!

In the first couple of levels you’ll be introduced to the SkyGems. These special gems look kind of like regular gems, except that they have little unique shapes and indents to them. You can match them like normal gems, and when you do, they’re added to your inventory. Upon beating level 6, you unlock the PowerLab, where you can create power ups using the SkyGems you’ve collected as ingredients. Try to collect as many SkyGems as you can! Power Ups can really help you towards your objective, plus net you some extra points. For example, the Flame Swapper can immediately turn any gem into a flame gem without the need of matching four gems.

2. Try to have moves left over!

When you hit your objective quota, all of your extra moves will turn random gems on the board into special gems. If you’re short points on getting all three stars on the level, these random gem explosions might be enough to put you over the edge. Make sure to plan out your moves and save as many as you can – you’re going to need the extra moves at the end for a bunch of bonus points!

Getting three stars on a level isn’t just for show! The game will show you a brief glimpse of the night sky and the many constellations strewn about. Every star you get is counted towards completing a constellation, and once you fill one up completely, you’re rewarded with a bunch of SkyGems!

Like any match-3 puzzle game worth their salt, there are many special gems for you to discover by matching gems in a specific order. They are as follows:

Trying to create as many of these special gems as you can is key to getting to your objective early and scoring a lot of points.

Before you stop playing the game, be sure to stop by the Power Lab. Keep in mind that power ups must be built before they can be used, which takes some time. It’s best to start a power up construction so that when you come back to the game it’ll be ready to go!

That’s all for Bejeweled Stars. If you have any other tips or tricks to share, leave a comment below!