Based in the same universe as Animoca’s older Beast Quest, which was an open-world RPG, this new title challenges us to unlock tens of heroes, spells and towers and battle endless waves of incoming monsters. And it always keeps the challenge level high!

This means that some advice on how to play the game is always welcome – so let’s just check that in our Beast Quest Ultimate Heroes guide below.

Check the Opposing Army in each stage

Knowing what enemy you’re facing is extremely important in this game, because it helps you better select the cards in your team.

That information is available before starting a battle – just check out the “Opposing army” info in the bottom left, where you will see what types of enemies you will face (and how many). You can even tap them to see each unit’s stats (HP, attack and so on).

Based on this information, you will have to switch from your physical damage-based deck to the magic damage based one, or go for something that has a bit of both. We’ll talk a bit more about deck building in Beast Quest Ultimate Heroes later on in case you need more advice.

Level up your top cards often

This card level up requires a lot of resources and money, which involves a bit of grinding for resources. But this is the only way to go if you want to build a perfect team and 3-star all battles.

3-star missions and auto clear them

This takes us to an extremely useful feature that will help you progress much faster and not go through each level again and again in your quest for collecting loot required for upgrades: auto clear.

Once you have 3-starred a mission, you can complete it over and over again instantly using the Auto Clear button in the mission’s menu – which is something you should take advantage of at all times in order to speed up the process of improving your cards.

Once you get into the battle, the real challenge begins: placing your towers in the right spot, as well as deciding what heroes to use (if any) and where to have them is equally important.

You should always pay good attention to the design of the level and see which are the perfect spots for your towers: some areas are built in such a way that they offer some towers huge advantages in terms of area of attack.

Start placing your best towers in those areas: you want the best you have dealing damage as often as possible. This also means that you should never start by placing your towers next to the monster spawning points first and move backwards towards the diamond.

No, always start by placing your best towers in the best spots in each level and build additional ones as needed, considering the placement of the previous towers and their type.

Some towers have special abilities (like slowing down enemies), some attack multiple targets and so on. Keep all these things in mind when placing your towers, so that they enhance each other’s strengths.

But towers are not everything in the game: your main hero and any additional heroes are really useful – mainly for creating choke points, holding enemies in place while the towers work their magic.

A good idea, for example, is to find an area where at least two towers can be active – one that slows down enemies and one that causes AoE damage. Place your Hero or Heroes there so that they gather as many enemies as possible in that area and watch them being blasted to pieces by your AoE tower!

What upgrade path to choose for your towers?

There are two upgrade paths that you can choose for your towers – damage or range increase. Whenever you choose a path, you can’t invest in the other, so you should always consider the benefits from going one way or another.

I can’t really think of many situations where upgrading the Range over the Damage of a tower is the better idea, so for most situations consider it really safe to only focus on improving your towers’ attack in each battle.

Place heroes on the course in key spots

I already gave you an example above regarding the importance of having your hero/heroes placed in key spots on the battlefield and I have to say it again: always consider their placement as they can make the difference between a win and a loss.

At the moment, the heroes can sometimes get bugged – leave their position and stay in a neutral area or get carried away by some sort of monster without dealing any damage. This means that you should always keep an eye on your heroes to make sure that they are in the correct spot, doing what they should.

I generally like to have two heroes on the field at all times – the starting hero up front, creating one choke point and a high health hero behind him, creating a second choking point near some other strong AoE and damage dealing towers.

Even if you don’t follow this approach, keep one important thing in mind: never send your heroes up front in an area where they’re not backed up by towers as that will give you almost no benefits at all!

Call early the new waves for a mana boost

In most cases, when you are in battle, it’s usually a good idea to try and call in early the next wave unless you’re already outnumbered. If you do so, you get some extra mana as a reward – and that can come in handy!

I usually call in new waves no sooner than the new wave progress bar reaches the E letter from the “Early” word and that works pretty well most of the time as by then I know for sure if I can handle the new wave early or not.

Since progressing through the game is relatively difficult, you can really use all the help you can get. And a lot of help comes from completing the daily quests each day.

They are relatively easy to get done and, if you manage to complete them all, you get some Gems as a top reward, over the coins and other items you win from individual missions. So make sure to complete those quests daily!

How to build your perfect deck

When it comes to building a perfect deck, you should always have in mind two important things: which are your best cards (heroes, towers and spells) and what type of enemy you’re facing.

In Beast Quest Ultimate Heroes, you have seven spots for creating a deck (8 if you are a VIP – which is really useful!) so your options are limited. You should strive to have a nice mix of towers that deal area of effect damage, those who attack a single target and are fast and deal a lot of damage and take advantage of any special towers you have.

In most cases, the rarer cards are the better option – but try to have at least one (I go with two) cheaper cards that you can place on the field in case things go really bad.

I also prefer to go with one additional hero card in the deck – the bulkiest you have, because their main goal will be that of staying alive and keeping as many opponents as possible in a single spot, so that the towers can easily take them out.

Spells or no spells?

This is a very important question in Beast Quest Ultimate Heroes when it comes to deck building: should you have spells or not?

I rolled without spells for a long time, considering them a real waste of mana (since they’re a single use item), but I realized that it’s extremely useful to have one around just in case.

The game becomes more and more difficult as you go up the stages and you will sometimes need that extra boost coming from casting a spell one or three times instead of relying on towers and heroes alone.

In many occasions, my spells made a difference between a 3-star win and a 2-star one, so I recommend having one equipped at all times, but only use it if you really have to. Otherwise, you’re just wasting mana!

Compete in all events

There are various daily dungeons that you can take part in each day, including the Endless Mode – all with various rewards that will come in handy when it comes to improving your team.

Make sure to make it a habit to compete in those events as often as possible and never miss a chance of earning some goodies for free!

These would be the Beast Quest Ultimate Heroes tips and tricks that we have to share right now, but if you have additional advice for fellow players, don’t hesitate to let us all know by sharing your comments below! 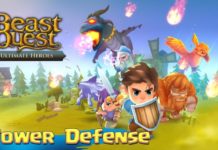