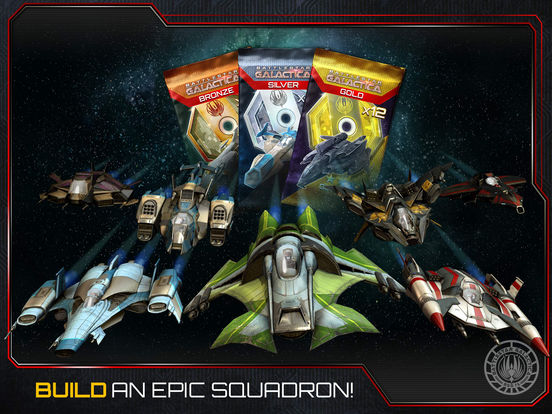 Ships are divided into three categories: alpha, beta, and gamma. It’s easier to remember them by their colors. Red ships beat green ships, green ships beat blue ships, and blue ships beat red ships. Yellow and purple ships beat each other. When you start up a level, you’ll see an information box containing a preview of the enemies you’ll be up against and what items you can get. Use this knowledge to build your fleet accordingly. Having the type advantage could mean the difference between victory and defeat!

Early on you have a chance to build a Raptor class ship from the 1-3 star construction cards. These are support type ships with a unique and very helpful ability, Secure Channel or Comms Drone. Using this ability will summon an ally ship into the battle after a couple turns have passed and it can easily turn the tides of battle for you. Granted, the ally ship that is summoned is at level 1, but just having another target can save your more valuable ships. If you happen to build one of these ships, try using them! The Raptor’s ability can really help you in the early levels.

Try your best to complete as many dradis events as you can, especially early on. The card packs you get from taking down all the Cylon fleets in these events can supply you with enough resources to upgrade your existing ships and build new ones. Early on you’ll want to build a diverse fleet as fast as possible to make sure you’re ready for anything. Keep in mind that if you use your FTL drive to flee the event, you still have a chance to claim the contract reward at the cost of cubits.

4. Choose from a variety of classes!

Each ship has a class assigned to it. We’ll go over a couple of them here.

Try to include different classes of ships in your fleet. You’ll need the combined power of each class to take down the enemies efficiently, unless you’re going for a specific strategy.

That’s all for Battlestar Galactica: Squadrons.