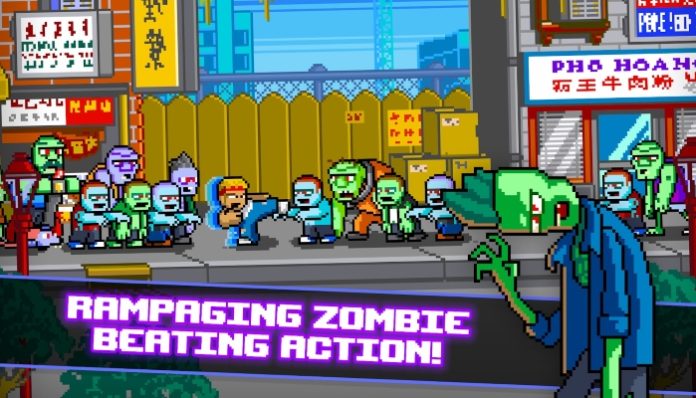 One fateful morning in the bustling city of NYZ, Zak, a martial arts enthusiast, is having his daily meditation when suddenly he comes face to face with the walking dead! Armed with only his kung fu skills, Zak heads into the streets to save the city!

Kung Fu Z is a side-scrolling beat ’em up game that is heavily inspired by retro classics like Final Fight, Double Dragon, and River City Ransom, among others. If you are an older gamer that is familiar with those series, then you are going to love Kung Fu Z!

Developed by Tiny Titan Studios, Kung Fu Z aims to blend modern arcade action with the retro games that established the beat ’em up genre. Simple combat techniques lets you bust zombie heads in an instant, and there are special moves for the more technically inclined!

Zak isn’t alone! As you battle your way through NYZ, you will unlock additional heroes. You can even find new gear for your heroes that changes their look and grants them special abilities. The possibilities and endless – will you dress up as a certain saiyan, or will you go for a classy tuxedo and top hat?

Plenty of challenging boss fights await you in Kung Fu Z. To save the city of NYZ from a grisly fate, you will need to topple them all and challenge the nefarious Dr. Z! The world is depending on you, Zak!