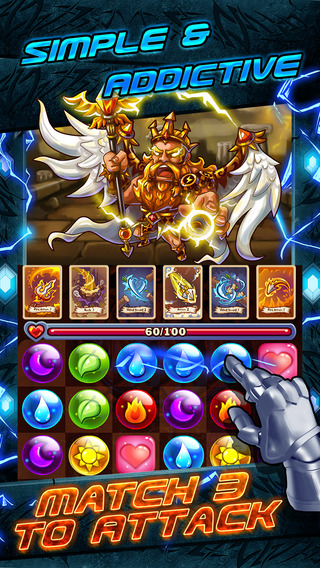 Battle of Puzzles RPG is a puzzle action game with RPG card collecting elements! That was a mouthful, wasn’t it? Well the game is true to its name in the sense that it offers a lot of depth and complexity, so we’re here to help you out with our Battle of Puzzles RPG cheats, tips and tricks strategy guide.

These match-3 puzzle games are always kind of tough as first, but we’ll help you get the hang of it with out Battle of Puzzles RPG strategy guide, so let’s get started.

1. Be aware of the elemental tree!

There are five elements in the game: fire, water, grass, light, and dark. Each element beats out another element, but can also be beaten itself! Fire beats grass, grass beats water, and water beats fire. Light and dark beat each other! When you attack an enemy’s weakness, your attack will do double damage. If you attack with what they’re resistant to, you’ll do half damage. With that said, it’s important to try to exploit your enemies’ weaknesses as much as you can!

2. Pay attention to the names of the levels!

Going off of the tip one, make sure you read the names of the levels. There is no explicit way to tell what type of enemies you’ll be going up against, but if you enter a level named “Flame Temple,” you can be sure you’re going to be running into fire monsters!

The main battle system of this game is all about setting up big combos. When you pick up mana, any mana it runs to is shifted around in its place. You can use this to your advantage by moving mana around to work in your favor. You are allowed to hold a mana piece for about 5 seconds, after that the mana will automatically drop in your current place. Try to always think ahead a couple steps so you can predict chains!

By default, your attacks will be spread throughout all of the enemies evenly. However, if you tap on an enemy, all of your attack will be directed to that single enemy. This is useful if you want to take out a specific enemy as fast as possible, and it could make all the difference in a battle!

5. Empower and transcend your team!

If you’ve got extra champion cards lying around, you can fuse them into your existing champions to empower them. This increases their level, giving them more attack power and heal power. Once they’ve reached maximum level, you can then transcend them, which is essentially evolving them into a new form. This increases their general strength dramatically, so you should empower your favorite cards!

You can bring a total of five champions with you into battle, so that means you can bring a champion of every element! Unless you know you’re going into element specific level, such as the aforementioned Flame Temple, it’s usually best to bring a diverse team with you so you can hit all weaknesses.

7. Befriend as many allies as you can!

Right before you start a level, you can bring a random ally champion with you into battle. This will net you friendship points, which you need in order to summon more champions! After you complete a level you are given the option to befriend the person whose champion you summoned. If they accept, both of you will earn even more friendship points, so befriend everyone you play with!

8. Take advantage of your skills!

Some champions have “leader skills,” skills that are always active so as long as that champion is equipped as your party leader. Be sure to go through your team and pick the champion with the leader skill that you think will help the most. Most other champions also have a regular skill, which charges up during battle. Once they’re fully charged, their icon will start glowing and you can tap on them at any time to make them unleash their skill. Skills are useful, as they do a variety of things, such as heal you, do a burst of damage, and so forth. Don’t forget about them!

Battle of Puzzles RPG is constantly updating with new events and levels, so keep training your team to be the best and keep fighting! If you have any other questions or suggestions, leave a comment below. Until next time!