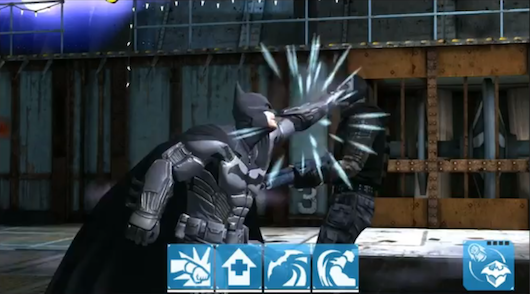 Fans who are eagerly awaiting Batman’s next crime-fighting adventure Arkham Origins, which releases next week, can get a head start on the action by playing the free mobile Batman: Arkham Origins game which is available right now. Not only does the mobile game offer a simplified yet solid beat-em-up romp through snowy Christmas Eve Gotham, it also allows players to unlock content in the console version by playing the mobile game and vice versa. Below are some handy tips and tricks to help you guide the Dark Knight to victory in the Batman: Arkham Origins mobile game.

Much like with the Injustice: Gods Among Us mobile game, the mobile version of Batman: Arkham Origins allows players to create a free WB Games account which, when linked between a game’s mobile and console versions, allows the player to unlock content in one version by meeting specific criteria in the other.

While linking your WB Games account to the Arkham Origins mobile game may not seem like it will do much good now (since the console version’s release is still roughly a week away), simply adding your WB Games account unlocks the Red Son Batman costume for the mobile version. Even though the Red Son costume is a little goofy looking, it also offers several different attribute upgrades and bonuses which the default costume doesn’t have, making it a perfect way to kick the game off with an added boost.

Use The Dedicated Block Button

During the game’s tutorial, you’ll find there are two different ways Batman can block incoming attacks. You can either press two fingers down on the screen or simply hold down the large shield icon in the lower left-hand corner of the HUD. I’d advise getting used to the latter option as the game seems to have trouble reliably detecting when you press two fingers down instead of one.

Throwing a useless punch at an enraged enemy when you meant to block is not only embarrassing, it can also leave you open to the added penalties many enraged enemy attacks carry such as damage over time or leaving Batman stunned and vulnerable to further punishment. If you’re more comfortable zipping your finger down to the right-hand corner (where the stance-switch button is by default), you can switch the two icons over in the options panel.

One of the very first skills you unlock is Fisticuffs which increases the damage of Batman’s basic attacks with each rank purchased. The early ranks of Fisticuffs are relatively inexpensive and can allow you to plow your way through early fights by simply mashing out basic tap combos.

Each of Batman’s two stances, Assault and Guarded, has its own benefits and tradeoffs. Knowing when to switch between stances becomes more important in later fights and a well-timed switch can sometimes mean the difference between victory and defeat. Also, don’t forget to upgrade each stance every now and then as doing so helps to further offset each stance’s drawbacks and increase its benefits. Guarded stance may be slower and deliver less damage, but a few ranks later and it can turn Batman into a powerful brawler who’s survivability is nearly unbeatable.