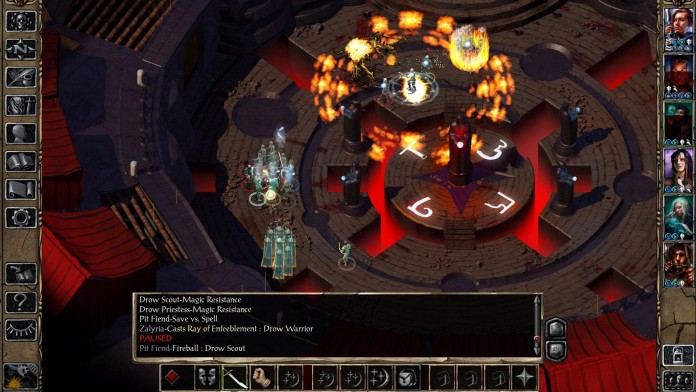 A classic role playing game is now available for purchase on the App Store. This isn’t a mere port we’re talking about, but a new improved edition that will make fans of the original release really happy.

We’re talking about Baldur’s Gate 2: Enhanced Edition, the enhanced version of Baldur’s Gate 2. This new edition of the game includes all the contents of the original game as well as some extra quests and story material included in Shadows Of Amn and Throne Of Bhaal.

There’s no better way to learn about a game’s contents by reading what the developers have to say about them so here is the official description of the game.

The Final Chapter – Baldur’s Gate 2 Enhanced Edition includes Baldur’s Gate 2: Shadows of Amn and Baldur’s Gate 2 Throne of Bhaal, the epic conclusion of the Bhaalspawn saga.
Four New Party Members – Four new characters can join you on your journey. At the behest of his dark patron, Dorn Il-Khan plunders and defiles the Sword Coast. Hunted by Red Wizards, Neera the Wild Mage evades and disrupts the Thayans at every turn. Exercising his growing combat mastery, the monk Rasaad yn Bashir leaves his former allies to hunt the dark figure that corrupted his brother. A mysterious thief in service to mysterious master seeks powerful artifacts from across the globe. Recruit them, use their powers, and uncover over 30 new locations.
The Black Pits 2: Gladiators of Thay – Explore the tactical depth of high-level Dungeons & Dragons combat. Undermine your captors and prey upon their weaknesses while you dodge traps and battle for your life against Demi-Liches, Mind Flayers, and Githyanki.
Easy Multiplayer – Baldur’s Gate 2 Enhanced Edition makes it easy to find, list, and join multiplayer games, even while behind a firewall.
Widescreen and More – Baldur’s Gate 2: Enhanced Edition features full widescreen support, remastered area artwork from original renders, and a host of other interface and gameplay improvements.

Baldur’s Gate 2: Enhanced Edition is now available on the App Store. The game can only be played on iPad.