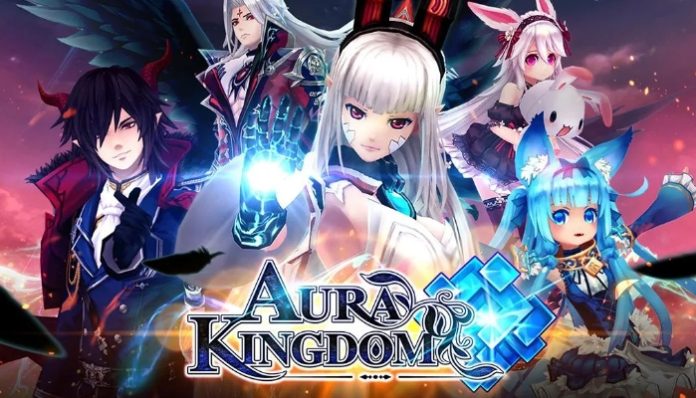 Gaia, the Goddess of Creation, needs your help hero! Aura Kingdom is an anime MMORPG taking place in the world of Azuria. Become an Envoy for Gaia and fight against the mysterious dark creatures that have appeared throughout Azuria.

Aura Kingdom is a faithful mobile recreation of the original PC MMORPG, with the same features including the companion Eidolons! Our Aura Kingdom cheats and tips will show you how to build your hero just right.

Aura Kingdom is an expansive game, as one would expect from an MMORPG, so let’s get started right away with our Aura Kingdom cheats, tips and tricks strategy guide!

Remember: the main quest is the most important quest line you should be focusing on, and if you’re ever lost you can just tap on the quest border on the left side of the screen. Your character will automatically go towards their next objective! The game will essentially play itself as long as you keep your character on track, so it’s great to have running in the background as you’re doing something else.

Something that will need a little more attention are the Daily Quests. Tapping the Daily button at the top right will bring you to the Daily Quests screen. Daily quests are split into five categories: weekly, daily, commission, plot instance, and special instance.

As the name implies, these quests reset every day so be sure to knock out as many as you can. Completing these quests rewards you with all sorts of helpful goodies like gems, fortification crystals, stamina scrolls, eidolon crystals, and more!

The smaller nodes in the Envoy’s Path are pure stat boosts, but the bigger nodes alter your abilities in some fashion. These are the most important nodes activate because they give your abilities new use, so you should try to work your way towards these nodes first. Tapping on one of the nodes gives you a preview of what skill it changes, so read up and figure out which ones you want first.

Once you hit level 15, you unlock the ability to inlay rune stones into your gear. Rune Stones further power up your gear. Open the Fortify/Inlay screen and pick which gear you want to inlay. Keep in mind that inlaying a rune stone can be reversed at any time you wish, so you don’t have to worry about saving or wasting rune stones. If you recycle a piece of gear that has a rune stone in it, it’ll automatically be put back into your inventory, so don’t worry about that either.

Point is, if you need a bit of extra oomph in your attacks, you should inlay as many rune stones as you can into your gear. Rune stones have different colors, and they boost different stats. For instance, the red rune stones boost base attack.

Try out different Costumes and Titles!

Costumes and titles aren’t just for show – some of them actually increase your base stats! Costumes are a bit hard to come by as most of them you’ll need to purchase from the shop with gems, but certain story quests reward you with them. Try to get as many as you can, as the more you have in general the better your stat boosts will be.

Titles are also obtained as you complete certain quests, and some titles are given to you automatically upon reaching a certain character level. Titles’ stat boosts aren’t as substantial as costumes, but they’re still helpful!

Don’t forget about your Eidolons!

Eidonlons are essentially your own personal party members. They help you fight and they come with their own ability sets that mimic actual weapon sets. They can really give you a fighting edge in battle, so don’t forget about them. Be sure to refine them to make them even stronger with the crystals you get from completing various activities!

That’s all for Aura Kingdom! If you’ve got any other tips or tricks to share, let us know in the comments below!