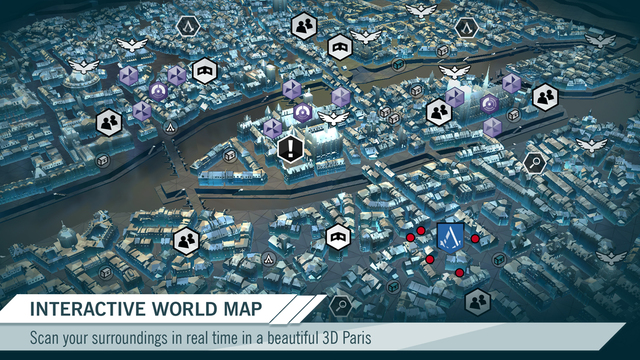 Assassin’s Creed Unity, the latest entry of the series developed by Ubisoft and the first one to get released exclusively on new consoles as well as on PC, is now finally available in all regions. And, as expected, the game’s companion App has also become available on the App Store a few hours ago.

The Assassin’s Creed Unity companion app comes with features that we have seen in other companion apps in the past few months, like interactive maps, equipment and item database and more. The app, luckily, comes with some interesting extra features that are exclusive to the App and that can be used to unlock content for the full game like Glyph puzzles that unlock, once solved, more missions for the Nomad Brotherhood that you send out on missions to unlock content for the main game.

In order to enjoy the extra content that can be unlocked with the companion app, you will need a uPlay account that must be synced with the full Assassin’s Creed Unity game.

The Assassin’s Creed Unity companion app is now available for free on the App Store. Make sure to check it out if you’re currently enjoying the latest entry of the Ubisoft open world series.