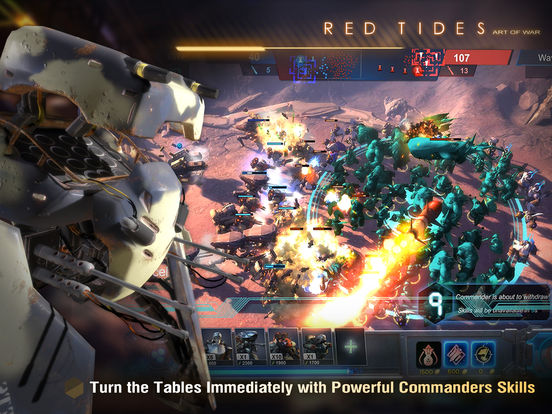 Read up on your units!

This is by far the most important tip we can give you: take the time to read up on your army’s units! There are three factions: Terran, Atlac, and Yaoguai, each with their own unique units. We know that the game encourages you to jump right in during the tutorial, but after those first few matches you’re going to want to know what unit excels at what instead of just randomly deploying your most expensive units.

You can view your entire army of units in either the Army Setup or Units screen. Here’s the basic rundown – each basic unit has its own strengths and weaknesses. They also have alternate forms which fill “niche” roles; alternate forms will make them excel at a very specific thing but usually have them lose usefulness in other categories.

One example of this is the Terran Regular Infantry, the most basic Terran unit. They’re relative weak with low stats around, but they excel in large groups. The first alternate form is the Sniper, which grants them longer attack range at the cost of lower attack damage and speed. The second alternate form is the Jump Jet Infantry, which has an active skill that turns them into air units, making them trump enemies that can only attack ground.

This is just one of a bunch of possible unit examples, so reading up on them is key to victory.

Deploy units with the flow of battle!

Soul Essence – the green currency during battle – is the main resource you need to deploy your units. You’ll automatically generate it over time, and the longer the battle goes on for the faster you’ll generate it. Knowing what kinds of units to send and when to do is just as important as knowing WHICH units to deploy.

Mismanaged use for your soul essence will put you behind and could cost you the match. Try to match the pace of the battle – is it early still? Mass your cheap units to save up for your powerful units while still putting pressure on your opponent. Is the match getting towards the endpoint? Sell off your weaker units and try to deploy more of your costly units. Reading the flow of battle is very important!

Don’t forget about your Commander Skills!

Terran: Rally – This skill places a flag at a location of your choice. All units that you can currently see will immediately march towards the flag. Useful for re-positioning and striking a different area.

Atlac: Teleport – Flag a location of your choice for a teleport. The next wave of units that spawn will immediately spawn at the location. This is great for getting the drop on your opponent – no one suspects a giant army to suddenly warp on top of them!

Yaoguai: Withdrawal – All friendly units in the targeted area are shrunken in size. This causes them to withdraw back towards base for ten seconds. You can reactivate the skill to return them back to normal size immediately. Useful for throwing your opponent offguard!

Atlac skills have a little more finesse to them. They have skills that shoot out laser beams that deals damage in a line, and they also have crowd control abilities that can hinder enemies. Their skills can also summon temporary units or towers to conquer the battlefield.

Yaoguai’s skills are as chaotic as they are deadly. Their skills focus on confusing your opponent utilizing sneaky tricks. Polymorph turns all biological units in the targeted area into monkey warriors that deal little damage. Mind Control lets you temporarily take control of all enemy units in the target area. Tricky!

These skills cost a secondary resource to activate, so use them when the time is right. These skills can help turn the tide of battle so don’t forget about them!

That’s all for Art of War: Red Tides. If you have any other tips or tricks to share, let us know in the comments below!