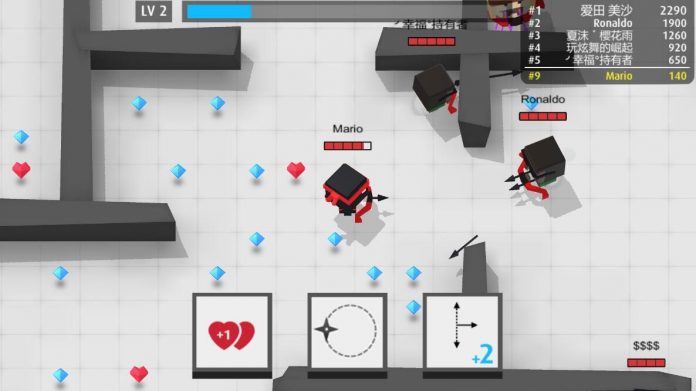 Join the battle and land some trick shots on players from around the world! Arrow.io is another online multiplayer game in the ever expanding .io series. You’ll be dropped into a small arena full of players. Grab your bow and get ready to survive!

Every time you level up you can upgrade your character, giving you destructive powers. Who will become the ultimate archer? We’re here with a quick rundown in our Arrow.io cheats, tips and tricks strategy guide!

Arrow.io is a fun and challenging game, but people can get quite competitive so you gotta fight back! We’ll show you how in our Arrow.io tips and tricks guide!

When you first spawn into an online game, you’ll never know what kind of people you’re matched up against. Some of them might be super powerful and taking them head on will be suicide! We recommend hunting for crystals early on.

The crystals will give you some experience points, and you’ll be able to get some upgrades through crystals alone. While you’re looking around for crystals, try to avoid the high level players and watch for any players in critical condition. Take ’em out for an easy experience boost!

3. Hunt the last enemies down!

Eventually, players will stop spawning into your current “room”. This means that eventually – assuming you can survive long enough – you’ll be faced with one last opponent. More often than not they will not attempt a direct assault on you, and will instead opt to run around the map some more to grab crystals to try to gain the upper hand.

Try approaching them to gauge what kind of upgrades they have. If you think you’re up to the task, it’s a good idea to hunt them down relentlessly so they don’t have a chance to get away. If they’re too powerful, you should retreat and gather up crystals to prepare for one final showdown!

While you do get a x2 multiplier for playing online, the enemies are endless in offline mode. They will continually respawn until you fall in battle. You can actually take advantage of this by powering up to an absurd level and just keep farming the enemies over and over again. As long as you’re careful, you won’t have to worry about dying.

In a sense, you could divide the upgrades into three different categories.

You should decide on one weapon modifier as soon as possible, then start collecting bullet and status upgrades. Be careful not to replace your weapon modifier!

That’s all for Arrow.io! If you have any other tips or tricks to share, let us know in the comments below!