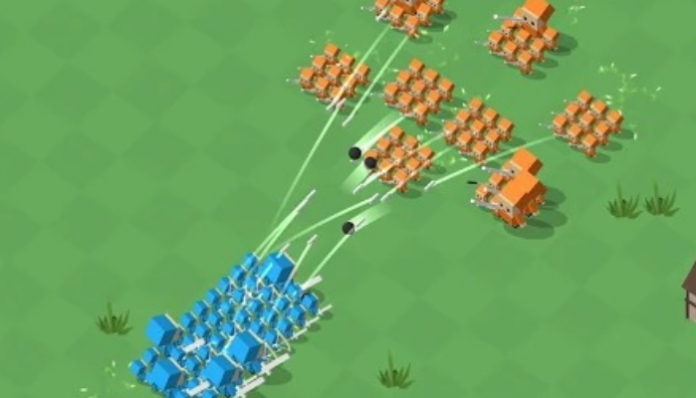 Army Clash is a simple one touch game where you get to lead pocket-sized armies large scale battles! Build your army using unit cards, then position them in a formation to outsmart your opponent, then with good timing launch them into the fight! Our Army Clash tips guide will show you how to control your army efficiently and how to get more units!

We will go over efficient formations and which units to use in our guide, so let’s get started with our Army Clash cheats, tips and tricks strategy guide to create the ultimate army!

The goal of Army Clash is to defeat the enemy army before they take you out! Before you hit the big fight button, look at the white arrow moving back and forth. You want to hit the button when the arrow is in the center, where the red area is.

The closer you are to the center, the faster your troops will march into battle! Try not to be too off the mark, as your troops will run in a different direction, making them late to battle.

Merge units to make them stronger!

Once you get enough coins, you can purchase a new unit card which is selected at random from the units you have unlocked. Early on, you will only have access to soldiers.

Units can be 1 through 5 stars, and if you combine two units of the same rarity they will merge to create a more powerful unit. The more you do this, the stronger they become, and it is the key to a powerful army.

Do not give up even when faced with defeat!

If a battle does not seem to be going well, do not retreat using the main menu button. You see, you earn coins based on how many enemies you take out.

So, even if you lose the battle, you may walk away with more coins than you did before, which you can use to get more units.

Change up your formation!

At the start of Army Clash, you will only have a small 3×3 grid to place your units in. Formation and positioning is very important in this game.

You will notice that if your units charge into battle and do not directly come in contact with the enemy, they will keep on running and will only turn back until they have gone as far as they can.

To avoid this from happening, you will need to switch up your formation as needed. Study the enemy’s formation, and then place your units accordingly. Make sure that they meet head on!

You can also purchase more grid space, one tile at a time. You do not get to choose which tile you want, so be wary. Even so, more placement tiles means more strategy opportunities, so start expanding your formation space.

Position your units according to their strength!

There is no in-game explanation or anything, but we have noticed that some units are better at certain things, so it is wise to position them accordingly.

For example, you want your soldiers and big soldiers to be in the front because they have more health than the other units.

Have ranged attackers like archers be in the back so that they can snipe from afar. You will need to experiment to see which formations work best for your army!

That’s all for Army Clash! If you have any other tips or tricks to share, let us know in the comments below!