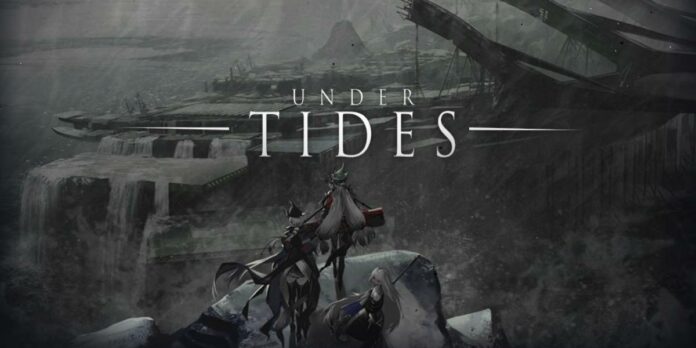 Something terrifying is emerging from the deep waters of Terra, and it’s up to you to investigate in Arknights’ newest limited time event, Under Tides! This event will have players explore the sunken ruins of Iberia to fight alongside Abyssal Hunters Skadi and Gladiia. Prepare yourself for this challenging event with the help of our Arknights Under Tides event guide and tips!

Under Tides Event Guide and Tips

Under Tides is a limited time event, running from October 21 to November 4, 2021. It unlocks once you’ve cleared main stage 1-10. The recommended Operator level for this event’s stages is 40, so make sure you come prepared. Deserted Salviento is the first area and will be available as soon as the event starts. The second area, Choppy Ruin, will open up on October 28 at 16:00 server time.

Completing the SV stages will award you with a special currency called Corrupted Iberian Record. You can spend these records at Barter shop from the event’s main menu. There are a lot of helpful items, including Gladiia’s Token, furniture, Battle Records, Skill Summaries, and more. The Barter shop will remain open until November 11, so you have time after the event ends to exchange your records.

Under Tides also has its own set of achievements, found in the “Try to Survive” part of the main menu. Make sure to collect your rewards after each SV stage in the Deserted Salviento and Choppy Ruin. Additionally, Gladiia, Kal’tsit, Skadi the Corrupting Heart, and Akafuyu will gain 50% more Trust when used during the SV stages.

Once you’re ready, head into the Deserted Salviento to fight your way through the first set of stages.

The first SV stage isn’t too bad, as you’ll be going up against normal Infantry and Tactical Hounds. There are two enemy spawn points, so make sure you’re covered from both, and you should be fine.

If an Operator gets 1,000 stacks of Nervous Impairment, they’ll immediately take 1,000 true damage and are stunned. Be very careful about your melee Operators with these guys around.

There are still two enemy spawn points on this stage, but now you also have two points of your own. You’ll run into Shell Sea Runners and Deep Sea Sliders again, but you’ll also encounter Floating Sea Drifters, which are ranged attackers that can inflict Nervous Impairment.

An Automatic Maintenance Drone will also appear during this stage. If the drone passes by the Emergency Aid Building, it will enhance the building’s healing rate.

You’ll have three points right next to each other that need to be defended. This stage introduces the Pocket Sea Crawler, a new type of elite monster. Pocket Sea Crawlers will not attack directly, but once they lose a certain amount of health, they’ll retaliate by damaging and inflicting Nervous Impairment upon all nearby Operators. Avoid clustering your Operators together, or take them out as fast as you can.

This stage introduces the Primal Sea Piercer, another elite monster. These guys are dangerous as they will always target Operators with the lowest HP, so be careful. Don’t forget to make use of the Emergency Aid Building!

This stage introduces The First To Talk, a massive threat to your team. Once it approaches your Operators, it will target the Operator with the lowest stacks of Nervous Impairment. It will then unleash Corrosive Vacuole, an incredibly dangerous attack that lasts 5 seconds, dealing physical damage and inflicting Nervous Impairment to the target and all adjacent Operators.

To make matters worse, The First To Talk is invincible as it’s using Corrosive Vacuole, so you must withstand the onslaught. On top of this move and the normal monsters, your Operators are very likely to hit 1,000 stacks of Nervous Impairment, so be ready with medics and the Emergency Aid Building.

The final challenge of Deserted Salviento will have you up against Shell Sea Runners, Floating Sea Drifters, Primal Sea Piercer, and the big boss himself, Sal Viento Bishop Quintus. If the name didn’t already scare you, just wait until you read what he does!

His first special attack is Great Tide, a global attack that hits all of your Operators. Great Tide deals moderate arts damage and inflicts Nervous Impairment.

His third special attack is Fragmentation, where Quintus splits himself and spawns two larval enemies called Offsprings on random tiles. The larvae are invincible at first, but they hatch after ten seconds and are vulnerable. Once hatched, the Offsprings devour an adjacent Operator, which deals physical damage, stuns them, and inflicts Nervous Impairment. You’ll need to kill the Offsprings as soon as you can to free the captured Operator.

Quintus will enrage once he drops to around half health, as shown by the blue aura around him. His attack increases, and all of his special attacks become stronger with shorter cooldowns. Collapse can now target more than two Operators!

Quintus will enrage one more time once he gets to around a quarter health, at which point you should see black particles floating in the air. His basic and special attacks become even stronger, though Great Tide is weakened due to its now incredibly short cooldown.

You have roughly three to four minutes to take down Sal Viento Bishop Quintus. If you take too long, he’ll use a special attack called Species Outbreak which instantly defeats you! Make sure to constantly deal damage to Quintus while fending off the small fry from your defensive points.

That concludes our guide on the Arknights Under Tides event. If you have any other tips or tricks to share, let us know in the comments below!