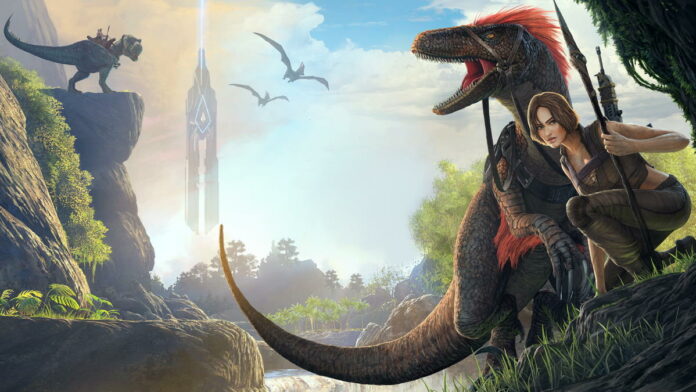 ARK: Survival Evolved is a survival adventure game where you must brave a land filled with prehistoric beasts. The game is quite expansive with the amount of things you can do, so it can be a little overwhelming for a first-time player. We’re here to help you begin your journey with our ARK: Survival Evolved beginner guide with tips and tricks to get you started.

To start, you should know that ARK: Survival Evolved features different play modes. You can enjoy the game solo, or you can jump online to play multiplayer. If this is your first time playing ARK, we highly recommend playing solo just to get your bearings. There’s a lot to cover here, and getting killed by another player—which is something that will definitely happen—is frustrating and may discourage you.

Before you begin, you’ll be prompted to select a Story Ark. These are the main worlds of ARK: Survival Evolved, and the first major story map is The Island, so we recommend starting with that one. The next screen will have you create your character and select your spawn point.

Your character’s physical appearance has no bearing on your abilities, so create whatever character you want. By default, your spawn point is selected to the easy zones, and you should not change this. Only experienced players that know the map should change the spawn point.

You’re now in the world of ARK: Survival Evolved! You’ll wake up on a beach, and your character will discover a strange relic implanted in their left wrist. After that, you’re given full control of your character. The first thing you should take note of are the status indicators in the bottom right corner of the screen. These show your overall condition, and paying attention to them is the key to survival!

We’ll explain them all, from top to bottom:

It’s time to explore and start gathering resources. Look around the beach and press your device’s use button to pick up objects. If you’re on PC, the default key to use is E. Some important resources to grab are stone, berries, and fiber. You can also punch trees to get thatch, but this hurts you a bit, so watch your health.

Once you have 1 stone, 10 thatch, and 1 wood, you can craft your first tool: a Stone Pick! Open your crafting menu, then double-click the crafting recipes you want to make. The Stone Pick allows you to gather thatch from trees without hurting yourself, and flint from rocks.

Be sure to keep an eye on your hunger and thirst. As we mentioned, you can drink the water straight from the ocean, and you’ll be fine. For food, you can easily scavenge for berries from any plant, and you can also harvest raw meat from dead dinos using the Stone Pick. Just be sure to cook it on a Campfire, which we’ll explain below.

At this point, you’ve probably leveled up, which grants you attribute points and Engram points. Open your inventory, then switch over to the Engrams tab. Engrams are basically new crafting recipes, and they must be unlocked using points. You gain points every time you level up, so unlock whatever you think is helpful. Just make sure to conserve a bit—don’t unlock anything you don’t plan on using, as you cannot get your points back, at least for now.

Here are some basic Engrams we recommend getting to get you started:

Next, we’ll spend your attribute points. You have ten attributes, and each one can be improved by using points. Here are all the attributes and what they improve:

For beginners, we recommend investing a lot of attribute points into weight, stamina, movement speed, and health, to start out with. Movement speed is particularly important, as you’ll be doing a lot of running to get away from hostile dinosaurs.

You probably ran into some dinosaurs while exploring, and the number one golden rule of ARK: Survival Evolved is to assume that everything is out to get you. Thankfully, the easy spawns have mostly docile herbivores, but that changes quickly once you start exploring outward. If you encounter a high level hostile dinosaur, it’s best to just run away and try to lose it around debris.

You might think it’s a good idea to duck into the water, but most of the land dinosaurs will swim after you regardless, only slowing down slightly. That’s also not even mentioning the terrors that lurk underwater, so it’s best to just stay out of the water altogether until you make a Raft or tame a swimming dino.

Speaking of which, you can actually befriend and tame most dinos in the game. Tamed dinosaurs have a number of uses—they’ll fight alongside you, carrying items for you, and transport you around, among other uses. Taming a dinosaur early on is a great way to get used to the system, so let’s try it out.

In order to tame most of the early dinos, you’ll need to knock them out first. To do so, aim for their heads and use a blunt weapon. Your fists work too, but it takes a lot of hits, so it’s better to use an early weapon, like the Wooden Club you unlock at level 8. You can also use a Slingshot to pelt dinosaurs from afar with stones.

Related | How to Summon the Wolf Twins in ARK: Survival Evolved Fjordur Map

When a dinosaur is knocked out, you’ll see that it’s unconscious only for a certain amount of time. Your goal is to place the dinosaur’s favorite food in their inventory. For example, herbivores want to eat berries and crops, while carnivores want meat.

The dinosaur will eat the food you leave it periodically, and eventually it will warm up to you. However, if the unconsciousness meter empties, the dinosaur wakes up, and you will have to start the process again. To refill the meter, feed the dinosaur Narcoberries or Narcotics.

With a tamed dinosaur, you can hold down the use button while looking at them to see what they can do. You can change their behavior, make them carry stuff, or have them stay put. You can even ride certain dinosaurs if you equip them with their matching saddle! Different dinosaurs can do different things, so try taming all sorts of dinosaurs.

That’s pretty much all the key things you need to know to start your adventure in ARK: Survival Evolved. Before we go, we need to mention one thing: you are going to die a lot during your first couple of days. Don’t let that discourage you, though—this game is brutal, but it’s part of the experience, and you learn a little more every time you bite the dust.

When you die, your body will be left at your site of death, and you’ll drop anything you had on you. After you respawn, you can recover your stuff if you make it back to your body in time, so don’t dillydally if you had valuable things on you.

To summarize, here’s what you’ll be going through for your first couple of days on the island:

And that concludes our beginner’s guide for ARK: Survival Evolved. You now have everything you need to know to survive out there, so get out there and start exploring! You’ve probably seen vibrant beams of light off in the distance, and those spots are a good place to start exploring. If you have any other tips or tricks that are helpful for starting out a new adventure, let us know in the comments below!