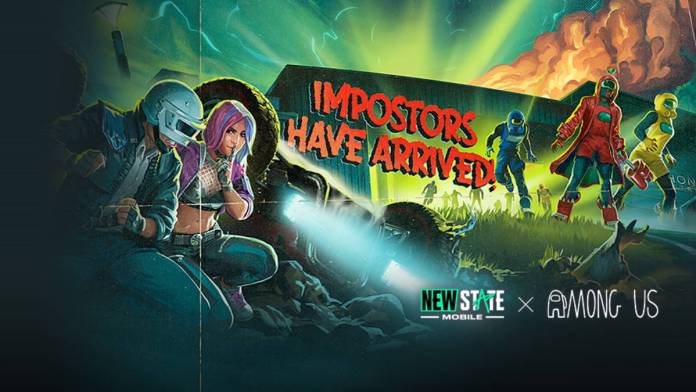 It was supposed to be just another ordinary day in Troi. Guns blasting over there, vehicles speeding over here… but then a mysterious ship came crashing out of the sky. When the dust settled, the ship opened and out came these funny little spacemen! That’s right—things just got a little more sus in PUBG New State!

The official PUBG New State YouTube channel just dropped a new video about their newest collaboration event with Among Us. In a move no one saw coming, PUBG New State is teaming up with the Among Us devs to officially bring over the iconic Imposters into PUBG New State!

Among Us’ Imposters Coming to PUBG New State

The Among Us collaboration event will take place between April 21, 2022, and May 19, 2022. During this time, PUBG New State players will get to enjoy a new Among Us-themed mini-game, alongside some new lobby decor that’s modeled after the Imposters.

Upon reaching the Starting Island, players can participate in a mini-version of Among Us. One player will be chosen as the Imposter, and the other players must avoid being killed by them. Only the Imposter can use weapons, so you’ll need to be careful.

What most players will be excited about is the inclusion of the limited time Among Us loot crate. Players can snag special Among Us-themed weapon skins, outfits, hats, kill sounds, muzzle effects. The crates also include a legendary skin for the M416 that must be seen to be believed!

To celebrate this crazy collaboration, all players will receive three free Among Us Crate Tickets simply for logging into the game during the event period. Act fast, as the tickets will expire on May 18. The Imposters from Among Us have exploded into PUBG New State in the best way possible, so don’t miss out on this exciting crossover event!

PUBG New State is free to play on iOS and Android.

Are Among Us’ Imposters Coming to PUBG New State