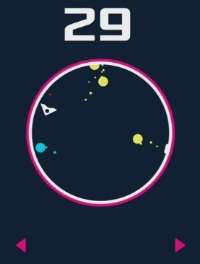 If you’re among those gamers who like easy to pick and play arcade games, another one of these titles named Worp will be released soon on the App Store.

Worp, developed by 18 years old developer Maxwell Glocking, is a really simple arcade game where players have to move inside a circle and avoid colored bullets shot by a cannon placed on the opposite side of the circle. The cannon moves alongside the player, so there’s really no way to avoid getting shot. The main goal of the game is to survive as long as possible to get the best high score possible.

Worp will be released on the App Store on May 21st. The game will be released for free with a few optional IAPs that are used to remove ads. There are various amounts that can be paid so consider doing so if you’ll like the game and want to support the young developer of the game.