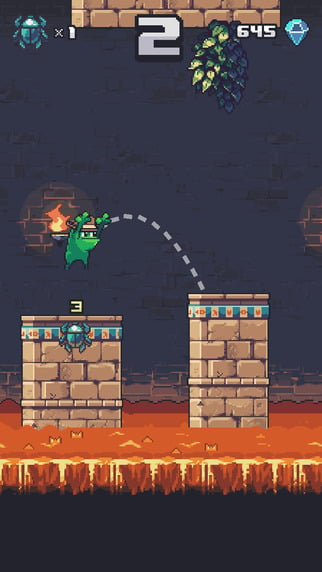 If you’re among the many players who have lost their patience while playing the smash hit Flappy Bird, another similar arcade game is now available for free on the App Store.

Temple Toad, developed by Dockyard, is another endless arcade game where players have to help a frog in getting as far as possible in the game’s only stage by timing jumps correctly.

Temple Toad comes with a unique gameplay mechanic that sets it apart from the already mentioned Flappy Bird and other games. When you make your frog jump, the character will continue jumping, with a line representing the trajectory of the next jump appearing when the frog reaches the highest point of its current hop. This mechanic gives the game a sort of rhythmic feel that makes it quite engaging. Later during the stage, players will also have to be even more careful with their jumps, as platforms will crumble and more.

Temple Toad is now available for download for free on the App Store. The game is really easy to pick up and play so make sure to check it out if you have enough of other endless arcade games and want to play something with a unique gameplay mechanic.