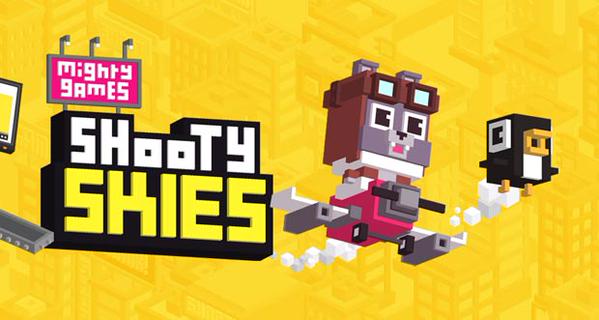 If you’re a fan of the arcade games developed by Hipster Whale like Crossy Road and Pac-Man 256, you will be happy to know that another game developed by part of the time that created Crossy Road is now available for download in all regions.

The new game is called Shooty Skies and it’s been developed in collaboration with two Australian developers called Ben Britten and Matt Ditton. The game is a rather straightforward shooter game where players will control their character and shoot at anything that moves. Players also have the option of charging a more powerful shot by not holding the screen. The overall experience may indeed be simple but it looks like it will be just as engaging as the previous games from the team.

Like the other games from Hipster Whale, Shooty Skies comes with several power-ups and the ability to unlock different characters with coins. And if you are defeated during a run, you will also be able to continue by using coins.

Shooty Skies is now available for download on the App Store. The game looks just as engaging as Crossy Road and Pac-Man 256 so make sure to check the new game out if you’re a fan of Hipster Whale’s arcade games.