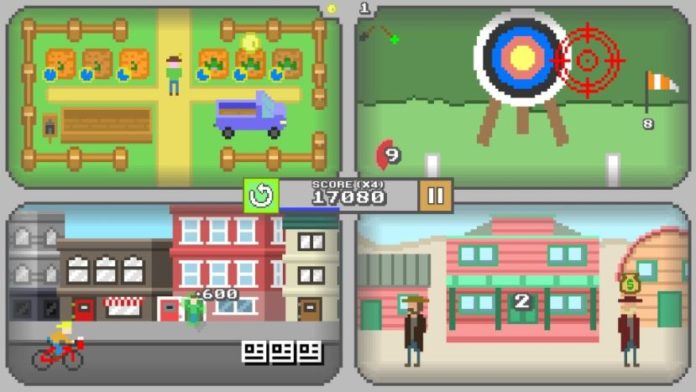 All arcade games are frenetic, challenging players in getting as far as possible with difficulty ramping up as the game proceeds, but how it would feel having to do play four arcade games at once? With Quadracade, you will soon find out.

Quadracade is a very interesting game developed by solo developer Kieran Haden. The game makes players play four arcade games at once, which is no easy task. Difficulty increases in all games as they proceed, so things get very complicated rather quickly. Thankfully, there are a couple of power-ups that can make life easier, such as one that slows down all games and more.

The Quadracade games selection is rather varied, and it is inspired by some of the best arcade games of all times, such as Space Invaders, Paperboy, Punch-out and so on. They are not identical to the original classic, but they are close enough.

Quadracade features over 30 games, but they are not available at the beginning of the game, as many of them have to be purchased with in-game coins. More games will also be added down the line, so things should stay fresh for a long time.

Quadracade launches on February 20th on the App Store. The game is also available right now on the Google Play Store.