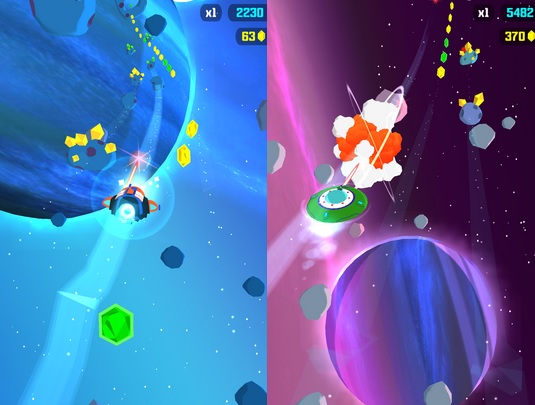 A new arcade game is going to become available for download on the App Store soon, a nice fast paced arcade game that’s just perfect to be played on the go for short bursts.

Galaxy Dash: Race To The Outer Run, developed by SuperMoon Games, manages to catch your eyes as soon as the game is started thanks to its nice visuals. The game’s graphics are so colorful and well done that it’s really impossible to not get charmed by them.

Luckily the game isn’t all show and no substance, as the gameplay experience is as good as the graphics are. In Galaxy Dash you will have to swipe your spaceship left and right to dodge asteroids and other enemies. It’s also possible to shoot by tapping, though, so you’re not completely helpless in the game.

To be completely honest, the first stages of Galaxy Dash aren’t as hectic as one might expect. Still, keeping playing will allow you to see how hectic things can become, with enemies shooting at you and asteroids that move towards your ship.

Galaxy Dash is a free to play game, so you can expect the usual features that are found in several other titles like upgrades, new ships, new items and more that can be bought with in-game currencies.

Galaxy Dash will become available for download later today on the App Store.