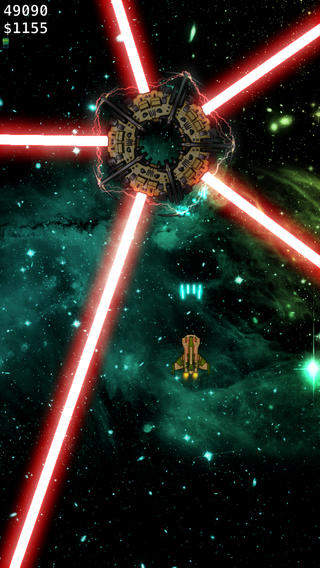 If you have been gaming for a very long time and like old school arcade games, you’ll be happy to know that an old-school inspired new game is now available on the App Store, a game that holds quite a resemblance to one real classic game, Galaga.

Final Flight of the Perseus has been developed by Third Party Ninjas and plays pretty much like old school arcade games, with your ship proceeding automatically in each stage. The only thing players will be able to do is shoot at waves of enemies that will try everything they can to shoot you down.

The gameplay experience of Final Flight of the Perseus is made deeper by the inclusion of an upgrade system, which will allow gamers to spend their earned in-game money to improve their Gun Speed, Shields and Gun Power. Upgrading is the only way to survive the increasingly difficult enemy waves of later stages.

The Shield mechanic used in the game also sets the game apart from other similar games. You will beging the game with a set number of shields, which can be increased by upgrading. Once hit, you lose one, forcing you to purchase it again at the end of the wave, since they won’t be replenished. Once all your shields have been used, the next shot will destroy your ship for good.

Final Flight of the Perseus is a really nice arcade game that tries to go beyond its old school inspiration and manages to do so nicely. Make sure to download the game on the App Store if you’re interested in some nice old school action with some interesting twists.