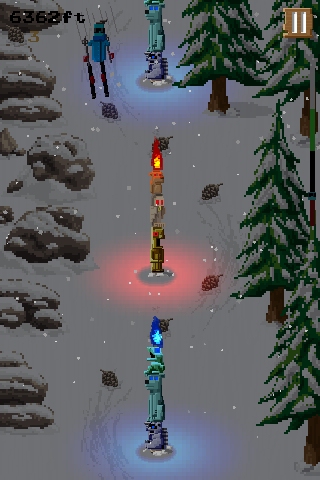 Another fun and quick to pick-up-and-play arcade game is going to be released next month on the App Store.

Dudeski is going to be a quite simple yet engaging arcade game. You will have to control your main character as he goes downhill.

The gameplay experience is made more varied by the four different sections included in the game, which have different hazards to avoid like totem poles, trees and the obligatory snow animals penguins and the even more obligatory Yeti. It wouldn’t be a Winter game without a Yeti, wouldn’t it?

As you might expect, things aren’t going to be easy at all, with all these obstacles and the fast speed of the game. Fear not, however, as developers have included some nice shortcuts that can be unlocked by collecting pine cones. As if this wasn’t enough, the game will also include some secret zones to discover.

Dudeski is a game that will not be breaking any new ground, surely, but it will probably be good enough for a quick play on the go. Quick but probably not too relaxing, if the game will end up being as challenging as it looks like.

Dudeski will launch on the App Store sometime during March. We’ll let you know the precise release date as soon as possible.