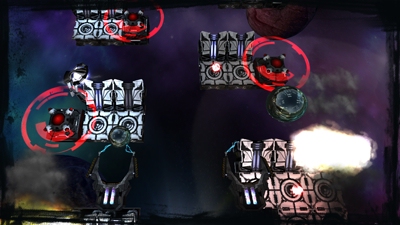 Most of the game available for download on the App Store are simple experiences that can be played on the go for just a few minutes before moving on to something else. This doesn’t mean that they lack any depth, it’s just that are quite easy to get into without having to spend hours upon hours in learning some complicated mechanics.

Dual Survivor, a new arcade game developed by Rising Step, is nothing like that, even though it may seem a simple to get into game in the beginning. The Dual in the title has quite a lot of meaning, as you will have to do two things at the same time in order to complete the game.

In Dual Survivor you will have to use your thumbs to steer two pads carrying an energy core. Things start easy with symmetrical tracks, but everything becomes more complicated quite quickly, requiring players to do different things with their two thumbs.

Dual Survivor is not an easy game at all, considering the avarege person doesn’t posses the level of coordination needed to comoplete the hardest stages. Mastering it, however, will prove that games have been able to overcome a quite though challenge.

Dual Survivor will launch on the App Store on February 20th. Get your thumbs ready by taking a look at one of the game’s trailers right below. [fresh_video url=”http://www.youtube.com/watch?feature=player_embedded&v=CE-fr7uQWdE”]