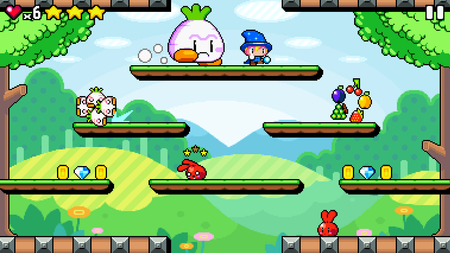 Another arcade game with a classic flavor is going to be released on the App Store later this week, a game that will make fans of the classic platform game Bubble Bobble quite happy.

Drop Wizard has been developed by Neutronized, the team behind Roar Rampange and Lost Yeti and features a gameplay experience similar to classic arcade platform games like the already mentioned Bubble Bobble and Snow Bros. In the game, players will have to stun enemies and use them to defeat others. Defeating multiple enemies at the same time will allow players to obtain extra points and even extra lives. The gameplay experience of Drop Wizard isn’t the only one of the game’s features that’s been inspired by classic games, as even its colorful graphics and simple music tracks would have been perfect for an arcade game released in the 90s.

Drop Wizard is an arcade game from beginning to end, featuring a simple gameplay experience that’s easy to grasp and enjoy. With over 60 levels, a few boss battles and secret modes, Drop Wizard will definitely keep players occupied for some time.

Drop Wizard will be released on the App Store on January 8th. The game will not included any IAP or ad.