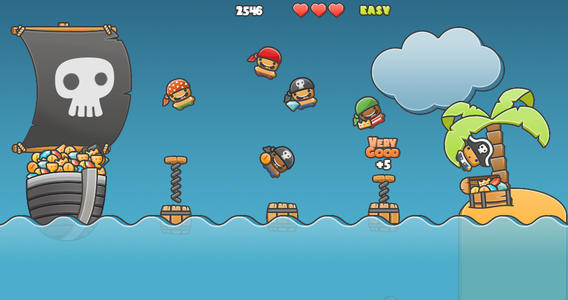 If quick to pick up and play games are your thing, you will be happy to know that a really nice arcade game is now available for download on the App Store.

We’re talking about Bouncy Pirates, developed by Nathan Malville, a really simple yet engaging arcade game that is just perfect to play on the game.

In Bouncy Pirates, you will be juggling some happy pirates in order to reach a treasure chests. Because that’s what pirates do: steal treasures. The pirates are launched from their ship by a cannon on the left, with the treasure conveniently placed on the right side of the screen. Grabbing the treasure isn’t enough in Bouncy Pirates, as you will have to go back to the ship in one piece.

Things may seem easy in Bouncy Pirates when you’re just bouncing a single pirate. Things, however, become way more complicated as soon as you will have to bounce several pirates at the same time. The higher challenge doesn’t make the game less charming, though, so you will definitely want to keep playing even on more difficult stages.

Bouncy Pirates is now available for download on the App Store as a free game supported by ads.