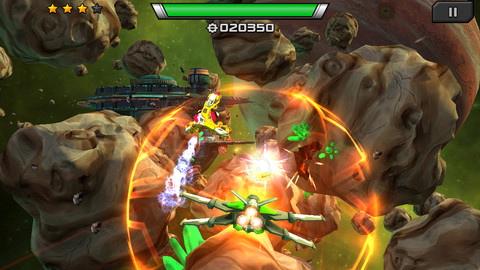 Psyonix’s iOS-based space fighter game Arc Squadron has been reborn as the free-to-play Arc Squadron: Redux. Now that it’s free to all players, I’m here to share some handy space-faring tips and tricks to help you get started on your intergalactic adventure to rid the galaxy of the evil Guardians.

Concentrate On A Single Ship To Start

When you see how many different ships and skins are available to adorn your hanger with, you might be tempted to forgo investing in basic upgrades and weapon modifications for your starter ship. Try to avoid that urge since while some of the other ships have vastly superior stats, they are also quite expensive and aren’t really required until much later in the game. A few basic upgrades and weaponry additions (the homing missiles and smart bombs are my personal favorites) can make even the starter ship a force to be reckoned with.

While enemy ships, mines, and turrets are the main threat, repeatedly crashing into a wall or asteroid can drain your health just as quickly as enemy gunfire. Take special care of upcoming environmental hazards and don’t risk squeaking in that extra enemy kill by putting yourself into a collision course with an environmental obstacle. The small chance at a rating increase isn’t often worth the larger risk of seeing a “mission failed” screen.

Don’t Forget To Replay Levels With New Upgrades And Ships

Once you’ve beefed up your ship count and arsenal a bit, go back and replay earlier levels you might have struggled with before. Attaining higher ratings is essential in order to unlock some of the game’s most powerful ships (such as the Rainmaker and Falcon) and weapon upgrades (such as the Black Hole and Chain Lighting) and reaching those ratings is a lot easier to do on early levels when you’ve got a souped-up ship at your command.

While some of the different cosmetic skins for a given ship may look cool, that’s exactly all they’re good for; looking cool. Unless you don’t mind plunking down a few real-life bucks to unlock the skins immediately, you should make acquiring cosmetic skins a low priority as even the alternate skins for your basic ship cost quite a bit of in-game currency, currency which can be much better spent on actual upgrades.

Want to try out Arc Squadron: Redux for yourself? You can download it now over at the iTunes app store for free!