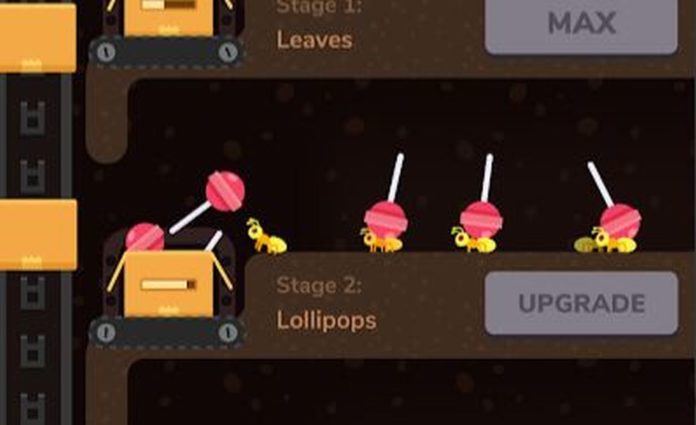 Howdy folks! In today’s article we are going to show you our Ant Factory tips and cheats which are going to help you grow a big and prosperous ant colony, with lots and lots of delicious products, from leaves (yeah, we gotta admit that’s not as tasty as it sounds) to lollipops, doughnuts and much more!

If you aren’t quite the insect fan, don’t worry, because this is not as bad as it sounds. The ants each stay in their lane, and not in a big and scary colony. They also look rather friendly, so you have nothing to be scared of.

Since this is an idle game, you won’t have stuff to do all the time, and that’s okay because you will have plenty of time to go about your day in real life while still enjoying the occasional gameplay.

In Ant Factory you will have to think strategically and make the right upgrades in order to help you get profit as fast as possible. So, if you are ready, let’s dive right into the Ant Factory tips and tricks! 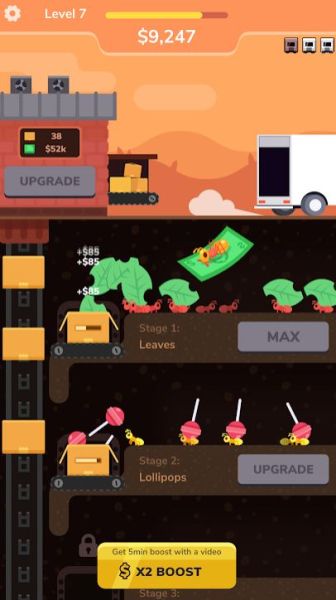 By upgrading the ants you will unlock a bigger number of ants into the lanes, thus making a bigger profit for you. It all takes time in the game, so you might want to train your patience, because soon you will get everything done just like you might’ve dreamed!

Every one or two levels that you upgrade the ants for, they will get increased number of Ants, increased Ant speed and value for the items produced. The box capacity will also increase with the level, allowing for more items to be placed inside.

I suggest doing this first, as it is super important that they are upgraded fast – if you want to make a lot of profit, that is. It will be way slower if you don’t make any upgrades and just wait for them to gather stuff.

Reset the levels for increased profit

Why loop you might ask? Well, because you can reset the stage quite a few times. You might want to get everything maxed out (if you are a perfectionist, just like myself) but don’t get fooled, as there are about 10 resets available per stage.

In my opinion you should start resetting after you unlocked Doughnut Ants or even Burger Ants. By then you will have a constant source of income and you will be able to make back the money spent on upgrades. After you have unlocked Rollerblade Ants you can start working on maxing out the Leaf Ants.

Tap on the ants to speed them up

This works especially well in the early stages of the game, where you need to constantly pay attention to stuff and obtain the maximum profit. When you are just starting the game, you don’t have money, level, upgrades – nothing!

You will have to do a little bit of manual labor if you want things to have a quick start, so do this whenever you can:

– tap on the ants to speed them up

– tap on the trucks to increase their loading speed 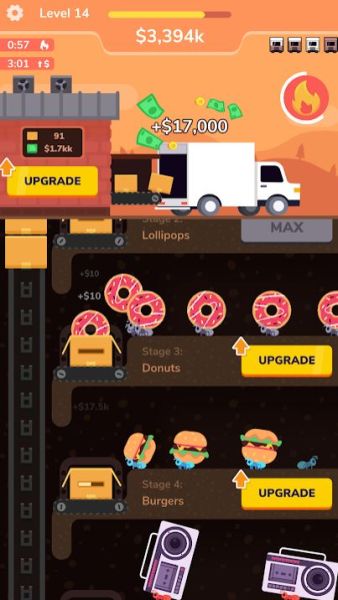 These will help you when you want to quickly make money, so if you are looking to upgrade some of the features fast, use these tips to do so!

Pick up the flying ant?

Much like Aladdin, there is an ant flying across the screen on a carpet made out of bills. This flying ant will grant you quite a nice amount of money if you tap on it and choose to watch the advertisement.

You should definitely tap on it and watch the ad, for it is just 30 seconds (at most!) and the money you get will be great if you want to make upgrades quickly. This feature is free, so take advantage of it as much as you can to help you throughout the game.

Get the X2 Boost

There will often appear on the bottom of the screen a “X2 BOOST” button, which is going to give you a 5 minute buff which increases the money you get. This buff can stack up, so once you have chosen to watch an ad to activate it, do so again to make the buff last longer – for 15 minutes.

Since this is a buff that you have to activate manually, you will have to do so quite often if you want that x2 buff, but otherwise just let the game run its own course and you’ll have the latest upgrades sooner or later.

You don’t have to stay in game non stop

Since this is an idle game, you are free to come and go as you please. The ants are going to keep on working even while you aren’t in game, so if you want to go about your day and still keep on making progress, it’s never been easier! 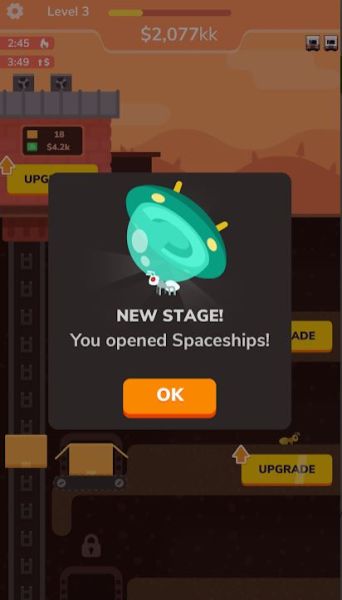 Just don’t forget to check on the game every now and then and collect your offline profits. The money you make while offline can be doubled if you choose to watch an ad, so I suggest definitely doing so because it will not be in vain.

This little tip will help you skyrocket your earnings! If you scroll down, you will see that there is a level requirement for each stage in order to be unlocked. Well, once you decide you want to unlock them, you need to know that the level isn’t as important as you might have thought.

If you want to unlock a new stage, just watch 2 ads and it’s done! For this to work, you need to be at most 2 levels below the required level, and ta-daa! Keep this in mind if you want to make a lot of money!

All in all, you need to make the upgrades more or less equally, and maintain a constant profit. By following our Ant Factory tips here, you will find yourself unlocking all the stages quickly and effortlessly!

Thus being said, these are all the Ant Factory tips and tricks that we have for you right now. If you know some other cool tips and suggestions about the game, make sure you share them with us and the other players down in the comments below!